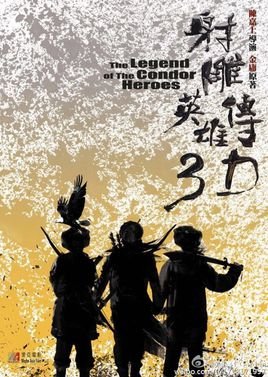 The story is set in the Song dynasty and at the beginning of the Jurchen-ruled Jin dynasty's invasion of northern China. The first part of the novel revolves around the friendship of two men, Yang Tiexin and Guo Xiaotian, who became heroes in their own right as they fought the Jin invaders. The bond between the duo is so strong that they pledge to each other that their unborn children will become either sworn siblings (if both are of the same sex) or a married couple (if they are of opposite sexes). The story focuses on the trials and tribulations of their sons after Guo Xiaotian's death and Yang Tiexin's disappearance. Guo Xiaotian's son, Guo Jing, grows up in Mongolia under the care of Genghis Khan. He learns martial arts from the "Seven Freaks of Jiangnan" and Ma Yu of the Quanzhen Sect, as well as archery skills from Jebe. The Chinese title of the novel is derived from an incident in Guo Jing's adolescent years, when he shot down two eagles in the sky with a single arrow. Yang Tiexin's son, Yang Kang, on the other hand, grows up in the Jin dynasty as a Jurchen prince's son. Although he is mentored by Qiu Chuji of the Quanzhen Sect, he also secretly learns the evil "Nine Yin White Bone Claw" from Mei Chaofeng at the same time. The boys' personalities differ largely from each other due to differences in their upbringing. Guo Jing is honest, loyal and righteous, but slow-witted. Conversely, Yang Kang is clever, but scheming and treacherous. They eventually meet each other and their respective lovers, Huang Rong and Mu Nianci. The main plot follows Guo Jing and Huang Rong's adventures and their encounters with the Five Greats. Meanwhile, Yang Kang plots with the Jurchens to conquer his native land, the Song dynasty. Yang Kang refuses to acknowledge his Han Chinese ethnicity and is strongly driven to acquire wealth, fame and glory. His treachery is slowly unveiled throughout the novel in the encounters he has with the protagonists. With Guo Jing's assistance, the Mongol army conquers the Jin dynasty and subsequently turns its attention towards the Song dynasty. Guo Jing is unwilling to aid the Mongols in attacking his native land so he leaves Mongolia. Guo Jing returns to the Song dynasty and helps his fellow Han Chinese counter the impending Mongol invasion. On the other hand, Yang Kang dies from poisoning after attempting to kill Huang Rong with a palm strike, but ends up hitting her spiked soft armour, which was stained with poison. He leaves behind Mu Nianci and their unborn son, whom Guo Jing named "Yang Guo". In the meantime, the Mongol invasion temporarily stops when Genghis Khan dies unexpectedly, although Guo Jing and Huang Rong have already seen countless civilian deaths due to the Mongol conquests. Edit Translation 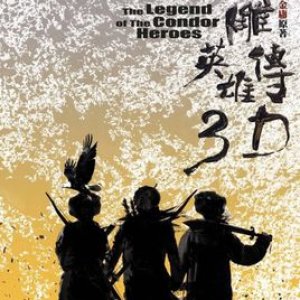