Currently Watching: Who Are You: School 2015

I started this drama for two reasons - the usual reasons: the fact that that it belongs to the "School" series and because of the cast. Though the first is a bit disappointing - can't get out of School 2013's influence - but the second is not in the least lacking. Perfect acting of a great young cast.

The plot might sound really cheesy and over-used. Honestly it is. But hang in there with me.

The drama takes place in one elite high school and tackles the issues in and about that school. First thing to do is NOT to compare it to School 2013 whatsoever; you'd lose.

Two twins have been separated young when sent to different orphanages. Their fate doesn't end there. They get attached in complicated, mysterious, and dark circumstances.

I won't mention any other events. Why? Because I'll spoil the drama for you. But I will discuss more in the characters.

Lee Eun Bi is a kind, caring and clever highschool girl growing up in an orphanage. She takes care of all the kids in the orphanage and stands up to her rights and her friends at school. Because of her upright personality, she gets brutally bullied by some classmates. No matter how she tries to endure, she reaches a point where she decides to give up. At her moment of surrender, a new life opens up to her. She gets stuck between her burning desire to be happy and start anew and her feelings of guilt, regret, and fear.

Go Eun Byul is clever but acts ill-mannered and indifferent, but within her she hides secrets. She lives with a loving and understanding mother and has cherished friends. But she is unhappy because of the secrets she's camouflaging. Her life takes a total opposite turn one day. Where would she end up??

Go Eun Byul and Lee Eun Bi are played by the gifted 15-year old actress Kim So Hyun. So Hyun has a God-given talent and she's always building on it. She's doing a great job at portraying different characters and various emotions. I totally see two awesome guys falling for her. She deserves to be loved; the cutie.

Our two female characters are entangled with two gorgeous guys with opposite personalities.

Han Yi Han is a national swimmer working his way up to eminence. He cares about three things in his life: swimming, his dad, and Eun Byul. He's an attentive son and friend and a hardworking athlete. When Eun Byul is in question, Yi Han is ready to lay his life on the line for her.

Han Yi Han is played by the newbie actor, Nam Joo Hyuk. The 21-year old man has only one other drama on his list: Surplus Princess. If you watched the cute drama you'd understand why I totally partied when I heard he was starring in this. He's one great talent I'm looking forward to in the following years. I'm so thankful to whoever gave him this chance.

Kong Tae Kwang is a troubled teenager acting up to avenge himself against his uninterested father. He plays the crazy careless kid and has no friends. When Lee Eun Bi walks into his life, Tae Kwang -and for the first time - looks at life differently. He starts caring sincerely for someone. Tae Kwang's slow change and his own shock at it is the sweetest things ever.

BtoB's Yook Sung Jae plays Tae Kwang. His height, blond heir, cute features, and clumsy actions fit the personality perfectly. If you watched him MCing shows (Like, A Song for You) you'd see how similar he is to Tae Kwang. He's improved tremendously in such a short time after Plus Nine Boys. I'm so glad to watch him so immersed in the role. 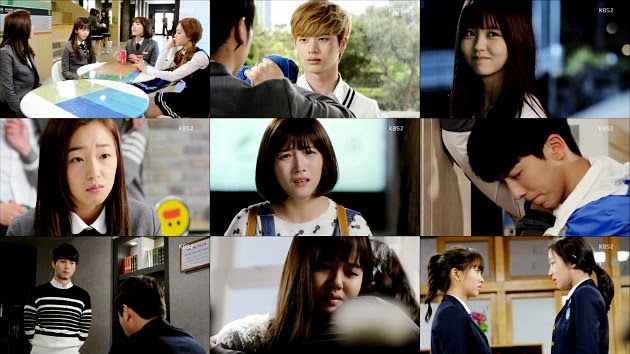 We have other typical characters. The bully-for-no-reason-but-just-because-she-was-born-a-b****; Kang So Young. She's played by one actress called Jo Soo Hyang whom I really don't want to like - I know I'm being childish judging actors by the first role I watch but I can't help it. The hardworking student (Park Min Joon played by Lee David really well) to fulfill his mother (Shin Sung Min played by one of my favourite actresses Kim Jung Nan and meanly convincing)'s expectations while sacrificing himself. The conflicted teacher (Kim Joon Soek by Lee Pil Mo and my favourite here). We also have students with weak personalities, lonely students, ambitious students, troublemakers, superficial, etc.. And we have all kinds of teachers: teachers who consider teaching as a job to earn money, teachers who still believe in the importance of 'education' and teachers who are still looking for the meaning of a teacher.

So it's a school drama but more of a makjang. They should create a new genre; school makjang. We have all the makjang elements here: amnesia, impersonation, adoption, mysterious secrets, death, extreme bullying, and alienating friends. We also have all the educational issues: obsessed mothers, troubled students, marks judging students, elite universities, and extravagant tutoring.

So why should you watch this if it has all the elements one would not watch a drama for?!

The drama is brilliantly acted by a bunch of talented kids. Though the themes have been overused, the writers are doing a wonderful job on creating an engaging story with interesting dialogues. The kids here do not only take what society, parents, and other students toss at them but fight back. Principals and people in power do not unconditionally side with parents and rich influence but try to look deeper. Despite the world being an ashtray, there are some good people out there. Although education has become a mere process of spoon-feeding students with what they need to get into the top universities, there are some teachers who still believe there's a certain message behind education; that a teacher is supposed to teach students when they commit mistakes and lead them to a better life. There are teachers who believe in their students and give them multiple chances. There are certain parents who project their opinions and plans on their children with no consideration to the child's feelings or thoughts, however, there are other parents whose children's own happiness and free-choices matter the the most. In this terrible world, it's still worthwhile having friends, trusting others, dreaming, and trying to be who we want to be. Because in this terrible world, there's some humanity left in some of us. 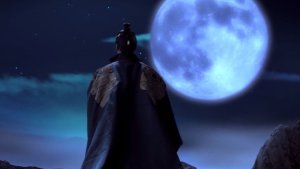 All Hail The King! LOVE THEM OR HATE THEM? 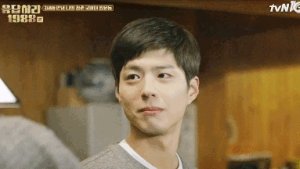