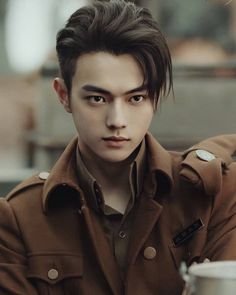 Completed
Arsenal Military Academy
0 people found this review helpful
by mapotofu
8 days ago
48 of 48 episodes seen
Completed
Overall 9.5
Story 9.0
Acting/Cast 10.0
Music 9.0
Rewatch Value 9.0
I didn't think I would like the romance as much as I did - it's the "girl-dresses-up-as-guy" trope that I've seen in multiple k-dramas before but not as cheesy in my opinion. And even if there were cheesy bits I thought it was quite well done and comedic. Both the male leads are likeable - usually I get second lead syndrome but this time I was rooting for Gu Yanzhen all the way. Bai Lu and Xu Kai have such good chemistry. Some people wish there was more romance, but I personally think it was a good amount given that there were bigger things (war) to worry about lol. The kiss scenes were taken out but you can find them on the internet.

THE SETTING THOUGH! I adore the outfits, the bars, the party scenes...it really makes me feel nostalgic for a time that I wasn't born in. I liked the songs too which help to paint the classic 1910s vibe. There are quite a lot of political discussions though so for me I skipped over/sped up those parts but was still able to understand what was going on mostly. If you know about/are into that period of chinese history then great!

The main character, Xie Xiang, is smart and a very strong girl, and not a damsel in distress character at all. In fact the rest of the female cast is pretty badass too, which I really appreciate.

Gu Yanzhen first comes off as the playboy troublemaker type and I liked how this trait didn't entirely go away but you see his character develop as he goes through different experiences. Xu Kai's acting was great, he really fit the role of Gu Yanzhen (the eyebrow thing and wink he does though! <3 ) He is definitely eye candy in this drama, but with spot on acting as well.

But boy it started off light-hearted and the last 10-15 episodes got more intense. I ended up crying in the later episodes as things got more sad... I thought the dubbing was pretty well done too, and I still can't tell who is dubbed and who isn't lol. I watched the episodes on dailymotion, the subs aren't entirely accurate probably, like one caption literally said "hoes before bros". If the political/military part makes you not want to watch it I say do it!! I'm not a big fan of the genre either but the relationships between characters and the romance were enough to make me binge watch this show and give it a solid 9.5 rating!!