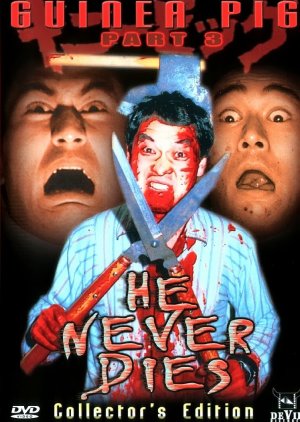 A men gets depressed because his girlfriend has dumped him for a friend. He tries to attempt suicide but to no avail, so he decides to scare the guy that stole his girl, by throwing his own guts at him. (Source: IMDB) Edit Translation

Add Cast
Be the first to add cast for Guinea Pig 3: Shudder! The Man Who Doesn't Die 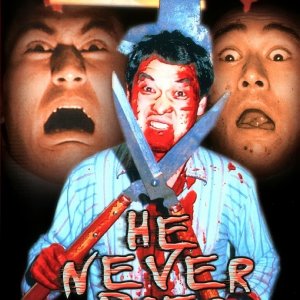 Completed
Cheer
10 people found this review helpful
Other reviews by this user
0
Aug 19, 2014
Completed 0
Overall 5.5
Story 4.0
Acting/Cast 5.5
Music 3.0
Rewatch Value 5.0
Third warning: This is not for the faint of the heart, under-aged or those who aren’t interested in extreme gore films.

Shudder! He Never Dies is one heck of a hilarious gory film. You didn’t read that wrong, gore films can also be penetrated by important amounts of humour especially if they’re Japanese. They always manage to insert dark humour into the bloodiest productions.

Unlike the previous two Guinea Pig’s films that skipped any attempt to create a plot and jumped to the gore itself. This one tried to build a little plot, okay maybe a tiny bit but it was somewhat meaningful. He Never Dies differentiate itself from all the other films of the Guinea Pig’s series because the main character was the one inducting pain to his own body. He realized that he’s an immortal so he can’t actually die no matter how hard he cuts his wrists, throat or any vital spot.

Having a funny take wasn’t meant to reduce the amount of gore in this film; it was actually reinforcing it with several brutal acts to one’s body. The depiction of gore was plain realistic even while showing the insides or the beheading. The special effects used for this part were pretty much convincing except some little details here and there.

As usual, the lack of a subtle plot forbids me from rating this any higher. As I said before, gore for the sake of gore don’t deserve any high appreciation from me even if this part and Flower of Flesh and Bones pleased me the most out of the whole series.

Do not watch if:
-You can’t handle bloody sadist gore films.

Shudder! He Never Dies was absolutely the funniest part of the whole Guinea Pig’s series. But being humorous doesn’t mean it was light, the usual elements of sick gore films are still there.

New Topic
Be the first to create a discussion for Guinea Pig 3: Shudder! The Man Who Doesn't Die