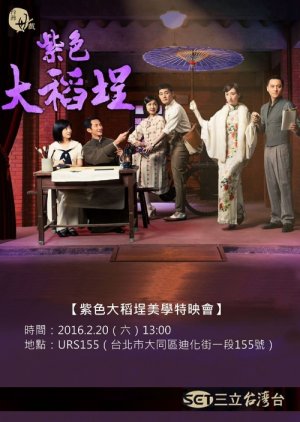 San Francisco, 1980. 72-year-old Guo Xue Hu runs into Xing Xiong, the son of his old friend Yi An, who comes to deliver a letter his now-deceased father had left addressed for Xue Hu. While speaking to Xue Hu, Xing Xiong discovers he knew very little about his father. Xue Hu reminisces about when he met Yi An in Dadaocheng in the 1920s and through his words, Xing Xiong gets to learn about his father, about Yi An and Ru Yue's tortuous love, and the turbulent times of Japanese-occupied Taiwan. Edit Translation 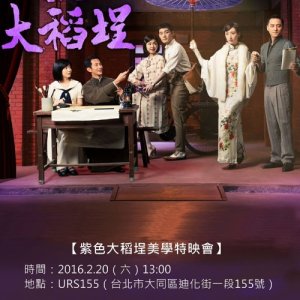 It’s a wonderful series that display Taiwan in 1920s under the Japan dominance. The focus is in the friendship between Guo Xuehu and Jiang Yi An. The story is based on Twatutia, but at that time is called Dadaocheng. That place where happens movement, gatherings of local artists.

The characters are based on real people. In the drama Guo Xuehu birth name was Guo Jinhuo, the name was given by his art professor. Looking on the internet his name’s Kuo Hsueh-hu.
Xuehu is a single child of only his mother.
In this series Yi An’s family has business with Tea. His dad has 3 wifes. They all get along well. The 3 wifes often play Mahjong with each other. Initially his father is against of his drawing and painting.
In the meantime Guo Xuehu receives supports from his mom who brought him to a art professor. He abandons school. Yi An has arguments with his dad, but manages to go on arts College on Tokyo, Japan.

Yi An mets Zhuang Ru Yue when he was still in school. She’s from countryside first time in a big city. Yu Rue throgh a friend becames a waitress. And later an actress. Plays about loving Taiwan is anti Japanese.
The boys met in the beginning of the drama Chianng We-shui. He’s doctor and founder of the movement/cultural against the Japanese order’s . He protested agains the opium sales. It’s forbiden to Japanese to consume, but Taiwan people could.
About romance there’s some attraction between Ru Yue and Yi An. No more spoilers about that. Go watch it!
Yi An, Xuehu, Tan_Ting-pho*, Lee Shih-chiao*, Yan San-lang*, Yen Shui-long* and Liao Chi-chun do gathers together to opposite of the Japan dominance.
*real name of painters.

At the end of the drama the climates becomes heavier. The known bombs are dropped on Hiroshima and Nagasaki. There’s uncertain feelings.
I felt with Ru Yue has a strong stroryline. As an actress she’s a difficult time. All the plays have to be approved by Japanese policemen. The use of the Japanese language was importante. Before the bombs obviously.
There’re the events of White Terror and February 28 incident.

It was an amazing and touching drama. I learned so much about Taiwan, and there’s much much more stuff on the drama. Super recommended.