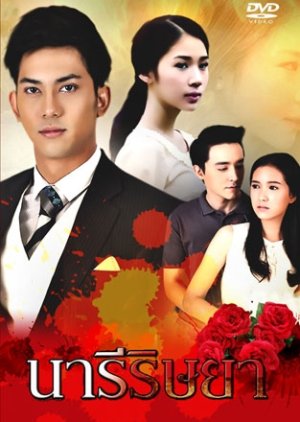 A nobleman who cheats on his wife, with her sister because he thought that his wife cheated on him too. Saiparn, the daughter of the first wife. After her mother's death, Saiparn changed into a totally different person. She is clearly unhappy with her mother's death and blames it on her auntie. As she grew up, she became more mean toward everyone, except the maid who took care of her mother back then.Throughout the lakorn, the father dotes on Needa/Nida, the second wife's daughter more than he does with Saiparn. Seeing this, Saiparn plans her revenge by making them unhappy because every time she sees her father, stepsister, and auntie live with laughter and happiness, it makes her think of her mother's sadness and death. Really all she wants is her father to love her the same too. Edit Translation 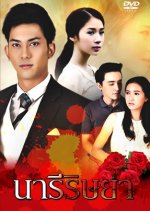 Completed
Socks
8 people found this review helpful
Other reviews by this user
0
Aug 3, 2017
33 of 33 episodes seen
Completed 0
Overall 8.5
Story 8.0
Acting/Cast 10
Music 8.5
Rewatch Value 5.0
I was surprised by how much I liked this Lakorn. "Pity Me" Melodrama can wear me out , but this was very well done. The characters were very nuanced (altho I was sick and tired of baby sister by the end). All the leading ladies were new to the screen with this drama (all under the age of 17) but they rocked it! Normally I wouldn't stick with something like this, but I binged this in 2 days.

There were essentially 3 love stories:

1. Ohm (big bro) & Pim. Their onscreen chemistry was a surprise! Jealousy, longing, denial - we have it all with this couple! Ohm usually takes support roles that barely get screen time, but after this role I hope he can get meatier bits. Pim looks like a baby. Probably b/c she is (16 while filming). Their relationship was pretty straight forward. After all the twists and turns of the other two couples these two were actually my favorites even though they didn't get enough screen time with their awesome tension.

2. Mark & Benz (big sis who was a firestorm). Can't wait to see her future Lakorns! Her character was misunderstood, ashamed, shamed and just wanted love and of course went about it ALL kinds of wrong. Her relationship with Mark needed more fleshing out IMHO. It was good, but it could have been better. They had chemistry when the writers and directors allowed them the screen time for it. Their relationship was seriously messed up, and the writer did a great job of developing their characters and making us care about their development and resolution. Warning: there is a force scene.

3. Ball & Looktam (baby sis). Lots of long meaningful glances on his part while she was sweet, innocent and happy to be beside him. By the end, someone went bat sh*t crazy and honestly the writers didn't really make me care. In fact I was just annoyed with their behavior to the point where I did quite a bit of skipping through their later scenes (the last 4-5 episodes). I felt bad for Ball's character. He'd held onto this unrequited love for so long and our idiot girl...was...an idiot. They were a good looking couple though. Ball has charisma, I hope he also can get a meatier role in the future as well. (A character with a bit more bite to him.)

I felt like they left too much for the last episode and the 4 episodes prior to that they could have mostly cut out. Ahhh filler...still it was a good lakorn. If nothing else watch it for Benz scenes.

Completed
Onelovestorie
7 people found this review helpful
Other reviews by this user
0
Sep 21, 2018
33 of 33 episodes seen
Completed 0
Overall 8.0
Story 7.0
Acting/Cast 8.0
Music 8.0
Rewatch Value 9.5
This review may contain spoilers
This is a very dark drama with some major mature themes, but a rollercoaster that is well worth the watch. I started this drama thinking I was watching a romance show and thankfully it was much, much more.

The story is about two sisters, two pair of sisters to be exact: the parent generation and later the kids. The kids generation were all quite a young casting and I was blown away by the acting prowess of Benz, the girl who played Saiparn. Saiparn and Nida are two sisters from the same father but different mothers. The problem lies in the fact that their mothers were both blood sisters, yes, both sisters had the same husband (high ew factor). The father essentially rapes the younger sister (Nida's mother) and this results in the birth of Nida and the death of Saiparns mother on the same day.

This sets the story up for the rest of the show as Saiparn hates the living daylights out of her aunt and half-sister as she believes, and partly rightly so, that they are the cause of her mothers death. Only partly because the full blame actually lies with their father (a disgusting piece of trash) who abused Saiparn and lavished Nida with everything her whole life as he thinks that Saiparn is the product of an adulterous affair her mother had, and is not his child.

SAIPARN- Very human female lead who is flawed, but is so perfect because of all her baggage and flaws. Saiparn was abused by her father who hated her, and eventually became an abuser to her own sister as well. She gets raped by Poodit, who is Rida's fiance (due to a scheme she set-up which made Poodit question Rida's love for him and Saiparn humiliates him which leads him to rape her in retaliation---I kid you not, he was apparently the male lead, but more on him later). The rape was the cliff that eventually pushed her over the edge and the trauma from that opened up her self-protective shell which she insulated herself with to push everyone away with previously. She was able to finally see her aunt (whom she blamed for her mothers death) as a good person and put the hatred she always had to rest. She survived hardships and overcame them and I really admire her for it. This is the complete opposite of Nida, who had no hardships until her fiance was taken away from her and the first struggle in her entire life basically unraveled her bubble she had lived in and led to her insanity.

NIDA- Nida had all the love in the world, her father basically gave her her every whim and lavished love and affection on her, to the point where he would deliberately take things that Saiparn dearly loved, even mementoes of her mother, and gave them to Nida. She was the most selfish person in this whole show, who was basically the product of coddling and protection from everyone in this drama. When her mother tried to curb her psychotic tendencies in an early episode, the father intervenes and slaps the mother, yet again feeding the selfish monster and setting her up for doom later on. I felt so satisfied when the father gets knocked out in the later part of the show by the very monster he created, it was sweet poetic justice. Acting wise I think she was weakest of the whole cast. She had this wide-eyed look throughout the show which I hated and later on in the show, her crazy act was so overbearing I generally skipped her scenes unless they involved Saiparn.

POODIT: Read PooSHIT. I hated him throughout the show. He is the type of wishy-washy hero you never want to see as the main lead. He apparently loved Nida, but raped her sister instead. Is forgiven by everyone, meanwhile Saiparn, the victim is made out to be the seducer and has to bear all the repercussions of his horrendous actions. He has a lot of inner battles as he still wants to marry Nida, but also wants to take care of Saiparn- because he is a gentleman (I choked everytime someone on the show mentioned how he was such a perfect model of a human being, YUCK). Only person who wasn't PooSHIT's fan was Saiparn and Nida's older brother, the one sane person in the whole show.

NAPAT: The angel. I seriously shipped him with Saiparn, but this idiot loved Rida too fishin' much (at this point you start to wonder if the main girl is Rida, since every male lead in this show LOVES her to bits, which is reminiscent of any kdrama love triangle). He was a doctor who basically took care of Saiparn after the rape, and later Rida when she goes into batshit crazy mode. I was hoping he falls for Saiparn while he is taking care of her, but alas it was not to be as Rida with her lead halo was too strong a contender.

Overall this was a really intriguing show and I stayed glued to the unfolding crazy drama, mainly for Saiparn as she was one of the most believable heroines I have come across recently in lakorns. She wasn't a goody-two-shoes, she acted mean, got even, and was a very tortured person. Yet, despite all this she learned her lessons and took the high road by the end of the drama.

I highly recommend this drama for anyone who is fed up of watching door-mat heroines, and someone who can stomach issues such as rape and abuse.