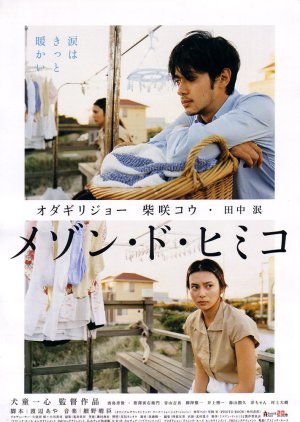 Saori has always disliked her gay father and has lived her life denying his existence. One rainy day she receives a visit at work from a young man called Haruhiko. He tells her that her father is dying of cancer and that the nursing home he operates is in danger of closing. Out of curiosity and debt, Saori goes to visit her father at the House of Himiko, a nursing home for gay old men. It is a sad place but filled with sardonic good cheer. Surprised but pleased, Haruhiko shows her around. The old men who live there are delighted. Saori is at first repelled by the relationship between Haruhiko and Himiko but she soon sees that their feelings are genuine. She begins taking an interest in keeping the nursing home alive... Edit Translation

Completed
Jia M
1 people found this review helpful
Other reviews by this user
0
Jun 29, 2017
Completed 0
Overall 7.5
Story 8.0
Acting/Cast 10
Music 7.0
Rewatch Value 7.0
House of Himiko rejects being sentimental even if its story is a little bit too tragic. Instead, it focuses on the positive—making this seem more like a tragic-comedy. What I enjoyed the most about the film is really how honest it was and how the characters are genuine.

Take note that I watched the second half of the film without subtitles and relied on my very little Japanese. But despite that, the film isn't short of what it intends to do. The contrast is particularly strong here.

The narration straight-up unfolds the narration and the setting. And we are introduced to Saori (Kou Shibasaki) who's always in a scowl, looks pissed and feels frustrated. That frustration bubbles up when the she starts working at the House of Himiko.

And the film takes time to get to know the characters through Saori's eyes. Hence, it's not a narrative that just focuses on homosexuality alone but also how others come to accept them. Saori's hatred is apparent. She refuses to hide her anger. Her disgust. She lets it out. To the people there. To her father (Min Tanaka). To Haruhiko (Joe Odagiri). But like Saori, these characters don't flutter. They remain themselves.

The film magnifies how people put on this wall, creating their own disillusionment and why this exists. Haruhiko tries to act together. But eventually breaks down later. Saori hates her father for leaving her and her mother but doesn't really take the time to know why, standing by the wall she built—that wall of hatred.

The House of Himiko acknowledges that its characters are not perfect but it also looks at these choices with reason and forgiveness. By looking at the backstory of these gay men, it gives them a backbone, making their stories understandable. Undeniably, the film does still have tacky stereotypes of dance number, cosplay and pretty boys. But ultimately, these stereotypes do not hinder the characters and what the film wants to show.

Kou Shibasaki here, barefaced, deglamourized is able to show her versatility as an actress. In the beginning, her face is full of utter distain, disgust. But later on, we see her smile and dance. Min Tanaka, despite his few lines gives an amazing performance. He embodies a seductive yet masculine look despite being a dress. He has power and he holds it right.

Of course I am fangirling over Joe Odagiri. And I cannot believe he was already 29 in this film. I refuse to believe it. But the heartthrob's character here is nothing short of Odagiri's trademark of a quiet, charismatic damaged soul.

Perhaps the lack of subtitles at the second half of the film did left me with question marks. But I gathered that the film's focus on sexuality doesn't only relay on its gay characters but if sexual tension is enough to form a relationship on Saori's part. I mean, I wouldn't be able to resist Joe Odagri too.