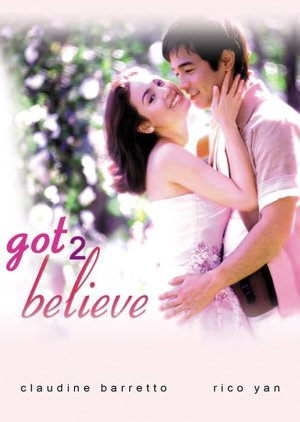 Toni is a wedding coordinator who at 25 is considered an old maid by her family and friends, but Toni believes that she will eventually meet Mr. Right. Lorenz is a wedding photographer who doesn’t believe in happy endings. What happens when the two make a bet that leads them to discover their feelings for one another? (Source: TFC) Edit Translation 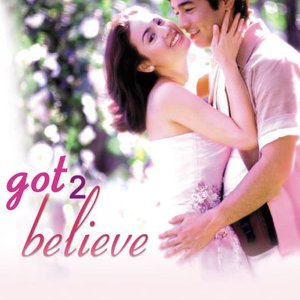 Completed
viewmii
2 people found this review helpful
Other reviews by this user
0
Dec 25, 2018
Completed 0
Overall 9.0
Story 8.5
Acting/Cast 9.5
Music 8.0
Rewatch Value 9.0
? STORY ?
Storywise, Got 2 Believe is the typical hate turns into love story. We have wedding planner Toni, who struggles to find love and is considered to be an old maid by her family and friends. Toni is usually the bridesmaid, but never the bride, and this contributed to her temper.Albeit her single life, she still believes in love and happy endings. So, where does our leading male comes in? Lorenz, a wedding photographer, often captures epic moments of Toni as a bridesmaid, making her a laughingstock. Lorenz's candid pictures is the reason why Toni doesn't see him as a good guy. But certain circumstances will change that, as the two will try to work together due to benefits and opportunities.
The story of Got 2 Believe can easily be found in a lot of books, movies, and TV series today. I personally love the trope of hate becoming love, but that's not the reason why I gave such an overly used trope a high score. Got 2 Believe remains as a legendary story in the Philippines due to its fresh introduction of romance, and the way it takes its turn of events.
The characters are sincere, and although you may want to slap them sometimes due to their actions, they are honestly worth watching. I think one of the reasons of why the characters seem this way is the polished acting, but we'll get to that later.
While you may have seen the premise of Got 2 Believe before, its showing of the authenticity of love is certainly something to look out for

? ACTING/CAST ?
Now, let me say this first. As a part of Generation Z, I have never come across the cast of this movie because they're not as popular as they are before my generation. But I will tell you this, I am not a fan of love teams. The Philippines' entertainment industry is usually popular for its set of love teams, but I, for one, have unfortunately not become a fan of a single one.
This is because some of the popular love teams that gets the movie and TV series deals do not usually ooze the same chemistry they do outside of the camera. What I'm trying to say is, some of they are honestly better in variety shows.
Got 2 Believe offers us the tandem of Rico Yan (playing Lorenz) and Claudine Barretto (playing Toni), both artists that I am not familiar with. You can say this is the first movie I've watched of this tandem. I am not disappointed.
Barretto really gave me the impression that Toni is this woman who envies but at the same time is sincerely looking for love. Amidst it all, Toni is dealing with her relatives who are desperate to see her married. Meanwhile, Yan made me swoon over Lorenz's charm and wit. I can't think of anyone suiting his character more than him.
Both acting was phenomenal, and I even developed a little crush on Rico Yan by the end of the movie for his charm and wit as Lorenz Montinola (RIP Rico Yan).
How can I say this? Their chemistry is just oozing! It's like they were made for each other, and I swear, my fingers curled a lot of times that it hurts.
Aside from the main characters, I have grown a soft side for the side ones. I love Vhong Navarro's character. He is Lorenz's sidekick on the movie, who is quite idiotic but says all the right words when needed. He's this little comic relief that the movie needed.
The things I usually complain about the TV shows and movies today is the lack of chemistry and bad acting, but I never found myself complaining about that stuff while watching this movie. While the cinematography and shots are not that great compared to the movies of today (the movie was made in 2002 where technology is just growing, so it's quite understandable), Got 2 Believe never made me notice that as I get immerse on the shouting, the ugly crying, and just plain happiness of the characters.

? MUSIC ?
I only recall two music from this movie, one which I cannot recall entirely, and one that is phenomenal. There's this song that the movie played when Toni tries to maintain a happy vibe as her best friend gets married, it was "Ikakasal Ka Na", which ironically enough, suited the scene. This song is like a bitter person wishing luck on a former lover or person of interest's marriage. That part was seriously sad, but at the same time, funny.
Then there's that phenomenal soundtrack, Got To Believe, which was sang by Side A (I think it's a cover but I honestly don't know).
"Got to believe in magic, tell me how two people find each other/in a world that's full of strangers/ Got to believe in magic, something stronger than the moon above/ Cause it's magic when two people fall in love" (this is the chorus of the main soundtrack, Got 2 Believe)
The lyrics are so touching and tugging, that I honestly found myself being a lovesick romantic!

? REWATCH VALUE ?
I'm not gonna lie, I cried buckets when this almost 2-hour movie ended. I just wanted to see more of Toni and Lorenz that I cried that much.
I even found myself unable to watch anymore movies or TV series after that. It took me a week and a half to get over that movie. I didn't watch the entire movie over that course, no, I'm usually lazy to replay it again, but I did watch certain scenes that made me feel as if I'm watching the movie for the first time again.
If not that feeling, I find myself noticing things I didn't noticed the first time, how their eyes sparkled, the hesitance, the smallest of gestures- everything!
This movie is worth watching, and is great for rewatching !

? OVERALL ?
I gave this movie a really high score (9/10). If you'll watch the movie's trailer, you may notice the basic editing and compare it to the movies of today but let me tell you this: do not let the trailer shoo you away. Do not let the basic editing shoo you away. Remember, this movie is made back in 2002, where technology is just growing. Considering that, this movie is a work of art.
Aside from the disclaimer, Got 2 Believe has a legacy of its own. This movie is considered by critics as one of the greatest romantic Filipino movie of all times. It really is a movie that will make you believe in love once more.
Perhaps the saddest thing about this movie is not that it has ended, but rather, this is Rico Yan's (the leading man) last film before he died later that year (RIP)
Fancy words aside, this movie is a phenomenon of its own ?