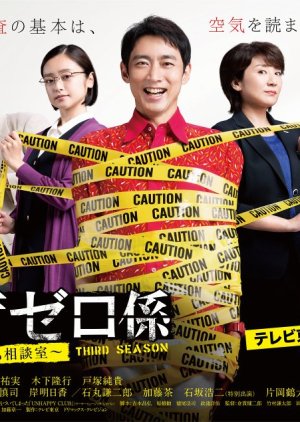 Completed
Erin
2 people found this review helpful
Other reviews by this user
0
Jun 16, 2019
7 of 7 episodes seen
Completed 0
Overall 10
Story 10
Acting/Cast 10
Music 10
Rewatch Value 10
This series is one of the best detective/police/crime dramas I have seen in a long time, and they were all made in different years, not to mention I watched the last two episodes of season 3 without subtitles! I binge watched this show for four days straight, the entire series; seasons 1 until 3!

I couldn't pull my eyes away from the characters that put so much awe, feeling, perfection, and wonderful storytelling into such intricate and thrilling plots. I think the story for each episode, leading up to the finale for each season, is really well written and definitely not like anything else I've seen in a long time (if ever) but I do believe the odd officers of "zero gakari" make this series worth watching! The mutual respect for each other and all of their hard work can be seen throughout the entire show.

This show is a whirlwind of suspense! I never saw the end coming, but then again, the story was something I've never seen done before either. I really wish the last two episodes were subbed, so I could understand a bit more; but for fans of this series, if you really pay attention, it isn't that hard to tell what's going on enough to get the gist of the situation up until the very last moment.

This series seems to be a bit underrated and I can understand why, too. But this show definitely will not disappoint!