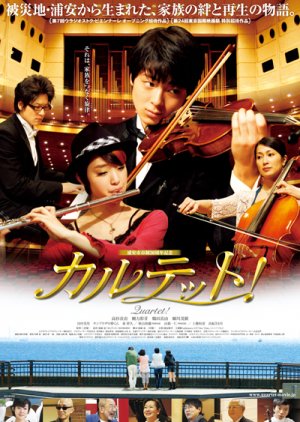 Filming for this movie began just before the 11 March earthquake and tsunami struck the region of Chiba. Residents of the town helped clean debris and rubble so filming could continue. Quartet centers around Nagae Kai (Takasugi Mahiro), a promising middle-school violinist living in Urayasu, Chiba. His music teacher, Chihiro (Tanaka Misato), tells him to find his own “sound,” but Kai can’t seem to concentrate on his music due to his family’s issues. Though his family has a background in music — both his parents majored in music in college — they gave up their dreams of a professional music career for the sake of the family. Kai’s older sister Masaki (Gouriki Ayame) is a troubled high schooler who has an inferiority complex due to her younger brother’s natural musical talents overshadowing her own flute-playing aspirations. The father, Naoki (Hosokawa Shigeki), is laid off from work and has to take on the role of home caregiver while his wife, Hiromi (Tsuruta Mayu), makes ends-meet at the local fish market. When one day Kai returns home from school to discover his father playing piano in their dusty “Beethoven’s Room,” he has a burst of inspiration for the family to form a Family Quartet. The almost-crumbled family makes a slow recovery back to happiness and togetherness. Edit Translation 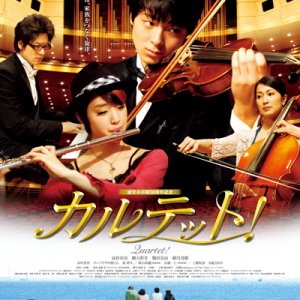 New Topic
Be the first to create a discussion for Quartet!