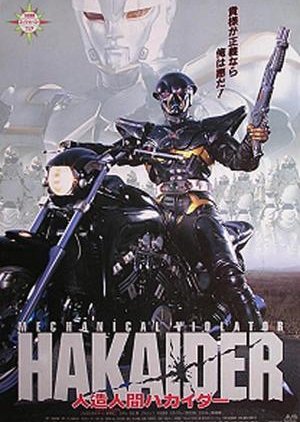 The popular villain/antihero from the classic "Kikaider" TV series stars in his own movie, as a dark defender in a post-apocalyptic future. Edit Translation 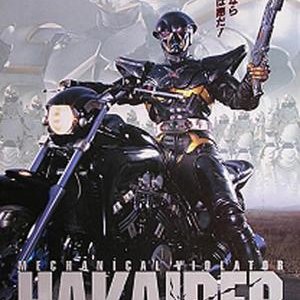 Completed
Senpai
0 people found this review helpful
Other reviews by this user
0
Nov 12, 2017
Completed 0
Overall 7.0
Story 7.5
Acting/Cast 8.0
Music 7.0
Rewatch Value 5.0
Classic special effects half mouth that we loved at the time.
Set in a post-apocalyptic future, the film shows a dark adventure. In the utopian city of Jesus Town, the leader Guljef and his mechanical angel Mikhael control the people who live without will. Against them, a group of renegades struggles to bring freedom to the people. Hakaider, a forgotten android, joins them. Even struggling for freedom and justice, it shows all its bloodthirsty side.
The  interesting thing about this Tokusatsu-style adventure is that there  was a certain inversion in the characters' visuals: the hero Ryu  (Hakaider) looks much more monstrous than his rival Mikhael, the  villain. It is, in a way, a paradigm shift within the universe of Tokusatsus productions. Shotaro  Ishinomori, creator of Mechanical Violator Hakaider, is also the  creator of another successful Tokusatsu personage, Kamen Raider. The film is technically bad, it's also as if the whole purpose of the film was to set up an additional story. So much so that the hero's motivation and fate are muddy, at best.

New Topic
Be the first to create a discussion for Hakaider