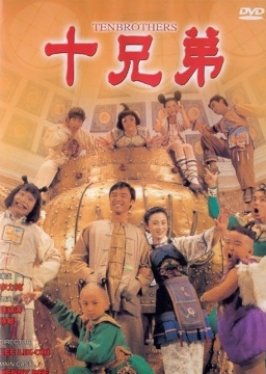 A couple inherit a small farm where they find ten magic pearls that contain the spirits of fairies. When their farm is invaded, they swallow five pearls each and give birth to the fairies reborn as children with supernatural powers. Edit Translation 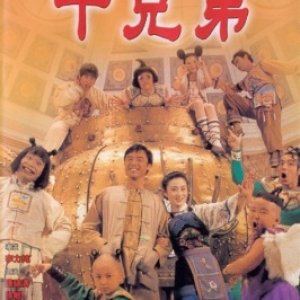 Completed
Senpai
0 people found this review helpful
Other reviews by this user
0
Jun 3, 2017
Completed 0
Overall 5.5
Story 6.5
Acting/Cast 7.0
Music 6.0
Rewatch Value 4.0
A fantasy film and silly adventure about a man and a woman who inherit a magic bracelet that gives them ten children. They soon realize that there are evil-doers who want to use the ten brothers to their own advantage.
The story begins with a poor man named Chan Dai Ha who sells Chinese desserts and falls in love with a single, rich girl named Gei Hao Yee. One day, when Dai Ha is going home, he sees a man carrying something, falling from the sky . He asks if he's okay, but the man runs away. Every time Dai Ha tries to help Hao Yee, he does something wrong and irritates her. One day, Hao Yee and his servant fall down a hill and he saves them. Without thanking her, she screams at him and drinks the soup wrongly with the ten magic beans in it. The magic beans made her pregnant so the next day, the doctor said she was pregnant, but because there was a law in her town that she can not get pregnant before the wedding, the villagers get angry and want to be punished. Since she was living with her father, they decided to break the relationship between them and run Hao Yee. When Dai Ha knows about it, he tells the villagers that he is the father, so Hao Yee does not need to run now. Dai Ha takes her to her small house and sleeps on the floor. At first, Hao Yee is angry at him, but soon they get on better. One day, her ten babies are born. Together, they both raise the children, but the next month they all became adults, except one, number ten. Since parents are afraid of their adult children, they ignore them and run away. Children run around town, causing trouble while Number Two and Number Three are adopted by the wife of the malevolent Sai Hung, who does not want her husband to know that her real children have died. Dai Ha meets the children and secretly give them food. Soon, the city misunderstood and decides to kill the brothers. Hao Yee and Dai Ha say they are their parents, so the only option was to leave, so they did. Four and Ten were sold to a circus whose leader was extremely strict and ruled harshly. Nine was sold to a wealthier family. The children were taught by their mother, and number one, who was the most mature, helped Dai Ha in his business in selling desserts. Soon, they discover that they have powers, but they do not want their parents to know. Suddenly, one day, everyone gets an illness. In the circus, the leader makes a lot of money because Number Four could stretch his arms and legs. Clients always paid the leader to mock him. Meanwhile, number one went blind, number five grew wings on the back, head number six grew a lot, and the number seven legs grew extremely long. Only number eight had no illness. One day his illnesses were healed, and instead he found his powers. They wanted their family to be united, so they tried many ways to find their missing brothers. They returned four, nine, and ten, but two and three were spoiled by the warlord. They did not know who their real parents were. When they soon get together, the warlord is jealous of the ten brothers and wants to kill them. The Ten Brothers try their best to oust the warlord. When all is settled and the warlord is evicted, a mysterious white-haired man appears in the visions of Number One and says that the brothers will have to die on August 15 if they do not go out with him. Number one does not trust him, but soon he does. When parents find out about the prophecy, on August 15, they send their children. Parents are very sad, but it is not possible for their children to stay. So on the night of August 15, the brothers are sent to the man with white hair, except Ten starts to cry and says something will happen to his mother. The other brothers learned that whenever Ten tears for no apparent reason, something will happen. One and two use their abilities to check on their mother, and they are horrified to see that Hao Yee is dying. The white-haired man tells them that she is dying because she gave birth to ten magical children - they - and her powers were too strong for Hao Yee to survive for much longer. The brothers are informed that the only way to save their mother is to become bean again, and the brothers sacrifice themselves to save the life of Hao Yee. Five years later, on August 15 (Mid-Autumn Festival), Dai Ha And Hao Yee give birth to a son, whom they call Eleven. They look up at the sky and see ten stars, and tell Eleven to say hello to their ten older brothers. Although the modern version is best known, the old version of the story was about the evil warlord of his city capturing his father. They had to save their father and for that they had to come together and work together as a team. The weakness of the 10 siblings is the limestone and they are not able to use their own powers if they come in contact with it until they wash with oil.