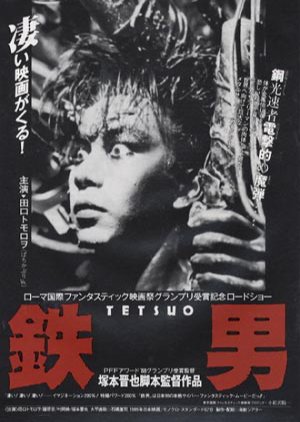 A man (called only "the man", or the "Metal Fetishist"), cuts open a massive gash in his leg and then shoving a large threaded steel rod into the wound. Later, upon seeing maggots festering in the wound, he screams, runs out into the street, and is hit by a car. The driver of the car, a Japanese businessman, and his girlfriend try to cover up the mess by dumping the body into a ravine, but the dumped man gets revenge by forcing the businessman's body to gradually metamorphose into a walking pile of scrap metal. This process starts when the driver finds a piece of metal stuck in his cheek while shaving. He tries to remove it, but realizes it is growing from the inside. Edit Translation 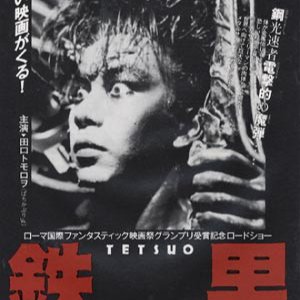 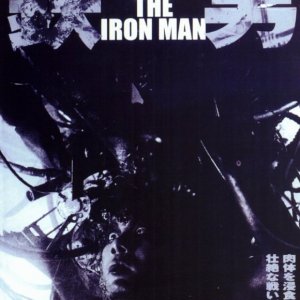 Completed
Cheer
18 people found this review helpful
Other reviews by this user
0
Apr 5, 2015
Completed 0
Overall 8.0
Story 8.5
Acting/Cast 8.0
Music 8.0
Rewatch Value 7.0
To think that Japanese artistic craziness has limits is really a false belief. Stunningly fascinating, unconventionally disturbing and perfectly made; Tetsuo will either make you fall for it or evidently fall apart.

When reviewing a gory film, I usually start off with warnings so let me put this out. Tetsuo – The Iron Man is certainly not your stereotypical kind of film:
Surrealist: check; it will make you think more than once about its contents.
Bizarre: double check; if you think you saw the entire cinema craziness –think again.
Excessively violent: Triple check; this film belongs to my goriest films’ list and I sure as heck saw a wild bunch of those. It would be an extremely disturbing and trippy watch for gore-haters.
Hidden message: full score check. It’s what makes this picture special in the first place. There was a pinpointed meaning behind the whole mess.

Horror and Sci-Fi aren’t my thing. I don’t like the genres separately and I certainly don’t care for them combined. But I do have a special liking to the underground director Tsukamoto Shinya –a perfect crazily talented Japanese director to add to my favourite bunch.

Horrifically graphic, the film never ceased the use of violence and gore to highlight its events and developments. Even the introduction was brought under the wing of visual grotesque. I wouldn’t deny that brutal violence, dismemberment and bloody chases are to my liking but that’s not the main reason I highly appreciated this. As I said, I am used to gore especially the Japanese type but they rarely have a meaning behind the acts of violence unlike Tetsuo.

Tsukamoto used the incessant gore to imply its vision around deep fears of technology and how far its development can mess a man’s life. He spotlighted the transformation and the resistance in a grabbing visual ceremony of grotesque. Of course, this is an over-the-top pessimistic view of the relationship between humans and the increasing threats of technology. That aside, the surrealistic nature of the film will make you draw your own interpretations as long as you pay attention to the little details.

The choice of the black and white was spot on. It only aggravated the impact of the picture without damaging the brutal gore. It added a striking darker tone to the already pitch black shadowy theme. Moreover, the leads’ acting was obviously matching the choice of colours giving it a monistic feel. However, Tsukamoto Shinya was undeniably the main performer of this picture. He was the one who wrote, directed, edited and even added his own special effects to the film. His camerawork, masterful close angles, engaging cinematography and hard-core choice of music were one of the finest I saw in gory films.

Tetsuo is one of those surrealist crazily bizarre Japanese films. Its heavy load of gore and brutally graphic content is a great mean to ensure its purpose.

Completed
etherealtaekibum
0 people found this review helpful
Other reviews by this user
0
Oct 9, 2018
Completed 0
Overall 6.5
Story 7.5
Acting/Cast 7.5
Music 6.0
Rewatch Value 4.0
With items such as the modern movie Tokyo Gore Police and the recentish anime and movie series, Japanese body horror genre isn't something that has gone unnoticed. It's something that has taken hold of its roots and become it's only genre, popular within its own right, making viewers uncomfortable or making our eyes widen with how grotesque things can be.
As a fan of the Japanese body horror genre, having read a lot of manga and seeing quite a few movies, I wanted to take a look at some of the more original, more classical side of the genre. That's how I came across Tetsuo, the Iron Man.

Now, I'm not sure what I was expecting, but it definitely wasn't what I watched. I both feel entertained and uncomfortable, but also like I came off a bad drug trip. I've just finished it and I have a migraine but you know what? It's actually pretty good.

Now, I genuinely have no idea how to write a review and summarise what I just watched so I'm just going to recommend almost straight away to watch the film, if you're interested.

What's good about this movie is that it does it's job for sure. You're uncomfortable and very on edge throughout the movie. There wasn't much time that part of my body wasn't seized up and uncomfortable from what was happening on screen. The content does incredibly well and I imagine when this first came out, it was truly horrifying.
The soundtrack – if it can be called as such – did an amazing job with causing you to feel uneasy and I even twitched around and fiddled with my ears at times to soften the sounds.
The editing and filming also portray the visuals of this in a way that's unnerving and makes you flicked your eyes away from the screen.

Now, the editing was also something bad. My migraine from finishing the movie was from the constant start stop state of the movie, as thought it were stop motion. It left me feeling quite ill at parts during the movie and made my eyes go cross eyed. Those sensitive to motion sickness, I would definitely advise avoiding this movie.
The soundtrack, although extremely good, is extremely high pitched at times. This went straight through my ears and caused me some severe ringing and discomfort, and irritated the hearing issues I already have. I did have to unfortunately pause it a number of times to take a moment.

Overall, it's very mixed for me. It does it's job and it does it very well, but some choices have left me feeling quite ill when I finished it, and there was definitely no need for it to be taken so far in terms of some aspects. As for rewatch? I highly doubt I ever will, unless it's just to make my friend(s) watch it to see them get uncomfortable.

New Topic
Be the first to create a discussion for Tetsuo: The Iron Man