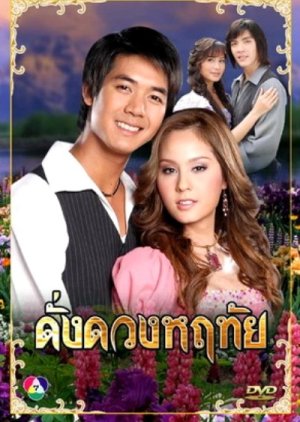 Dung Duang Harutai is the story of three kingdoms. Kasit ruled by King Rungsimun (Weir) is the wealthiest and most powerful but they lack a sea route, for this reason King Rungsimun had planned to politically wed Princess Munisala (Rotmey) of Thanta in order to conveniently use their water route. However if both Kasit and Thanta were to unite that would cause Puntoolat to become isolated and for this reason the three kingdoms have longed lived with suspicion of one another. Princess Munisala decided to flee in order to escape the wedding because she had heard many ruthless stories about King Rungsimun but she accidentally fell into a trap and was rescued by Prince Tiyuttithorn/ Pee Chai (New) of Puntoolat where she asked to seek refuge. Upon hearing the news of Princess Munisala's disappearance and learning that it may be linked to Pee Chai, Princess Tasika (Kwan) feared the start of a war and so she made her way to speak to Pee Chai and got kidnapped by King Rungsimun and brought to Kasit. Tasika believed she was kidnapped as a hostage in order for Kasit to negotiate Munisala's return and so she began at first to dislike Rungsimun. However Rungsimun had fell in love with Tasika at first sight and so began their love story, but things get complicated as Mina (Nok) constantly stirs up trouble, by trying to harm Tasika as she was in love with Rungsimun. Meanwhile Munisala and Tiyuttithorn also started to slowly fall in love. (Source: Asianfuse.net) Edit Translation 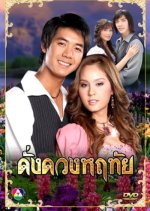 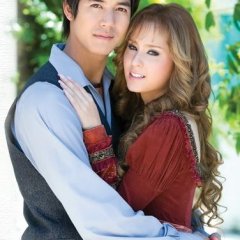 I found most of the characters annoying and flawed. Rungsiman being the one who's most flawed because his character was inconsistent. Halfway through the drama he completely flips into some soft boy head over heels for Tasika. But in some other parts, he's the tough powerful King. I found his obsession over Tasika baseless. When, where, and how did he come up with the idea that he would love this girl. He saw her once and completely dedicated his time on her. The director did a horrible job at developing their relationship. I saw nothing significant until half way done then all of a sudden Rungsiman was obsessed. Their relationship development was toxic and baseless. Falling in love with your kidnapper, expecting your victim to fall in love with you, just the whole thing, is toxic and undeniably hard to accept as a viewer. The execution was not done right and if it had been done right maybe this drama would have been more enjoyable.
Kwan's acting was pretty bad in this drama. I've never been a fan of her acting. Something about it screams amateur. I didn't have any problems with the rest of the other actors. I didn't find them as cringey as Kwan.
My favorite thing about this drama was Benlee and the soundtrack. Other than that, I think the overall of this drama was flawed in many ways.