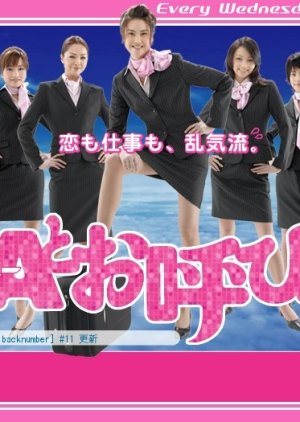 28-year-old, single domestic airline CA (cabin attendant), Yamada Sae, looking for love and fulfillment in life. Five years ago, her high school sweetheart was snatched from her grasp by a CA.That’s what prompted her to pursue a career as a CA despite of having no interest in the profession itself.In the air, Sae experiences losing altitude of self esteem by repeating bungles, and is ordered time and time again to write letters of apology by her boss.On the ground, Sae devotes her full attention to attending ‘Go-kon’ (group blind date, the ritual which fuels the social life of Japanese singles). But on one of these Go-kons, Sae finds a younger, prettier colleague,who snubbed Sae’s idea of showing up wearing their killer uniforms. Sae learns a lesson about the rules of survival in the love jungle; there are no rules! And if that isn’t enough, she is constantly looked down by nasty international CAs. But Sae shows cheerful resilience, or even talent for navigating the girls through fighting against common enemies such as womanizers specializing in CAs. Still Sae has difficulty expressing her honest feelings to a handsome pilot, saying spiteful things,which only leads into their perpetual quarrel. You might call it the foreplay of a relationship.Through her bumpy flight, Sae is gradually learning that happiness is something not given by others, but grasped by oneself. Edit Translation 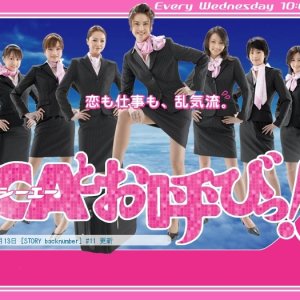 New Topic
Be the first to create a discussion for Call me CA!