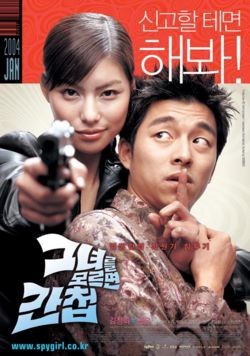 Go Bong has a huge crush on Gye Soon who works at a fast food restaurant. He puts her photo on their internet and she becomes the hottest girl in town. But she is frustrated because she is a spy from North Korea to catch a betrayer. Edit Translation 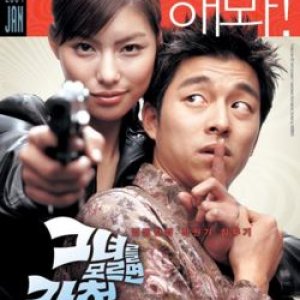 Completed
KdramaQueen89
7 people found this review helpful
Other reviews by this user
0
May 30, 2012
Completed 0
Overall 7.0
Story 6.0
Acting/Cast 9.0
Music 6.0
Rewatch Value 7.0
Who doesn’t love a good romcom with a bonus of Gong Yoo? That's what I was expecting but...

This movie claims to be a romantic comedy and I feel like they didn’t fufill that. It wasn’t that hilarious nor was there real romance. Sure there were subtle funny scenes here and there but nothing that will make you fall out of your seat. As for romance, the couple goes on “dates” but its not identified as dates and their relationship really doesn’t get explored much. The ending was open-ended which I didn’t like. Still, the movie has enough going on to keep you from getting bored.

A positive I found was the lead actors. Their acting was natural and they had good chemistry.

Because I liked the lead actors I wouldn’t mind seeing this again because it wasn’t horribly boring but its not something I have to see right away.

Overall this movie is forgettable although worth a watch once.