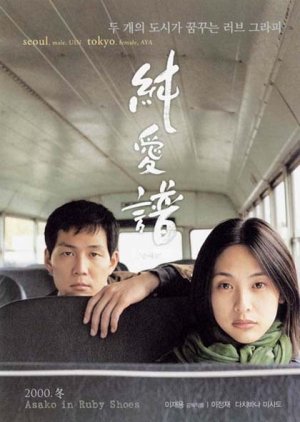 Uh In is a public servant and bored by his job and his life. He feels lonely and is interested in a red-haired girl he meets at work. However, she isn't interested in him. He turns to the internet and even gets himself a credit card only to watch the webcam girl Asako day after day, who happens to have red hair. Slowly this starts to become an obsession and when it is announced that Asako will take her leave of webcam business he decides to visit her. Edit Translation 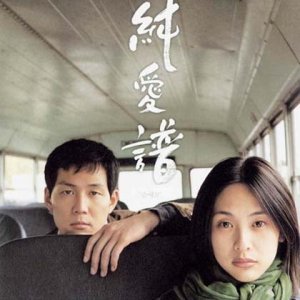 Completed
Jia M
0 people found this review helpful
Other reviews by this user
0
Jun 29, 2017
Completed 0
Overall 8.5
Story 9.0
Acting/Cast 9.0
Music 6.0
Rewatch Value 6.0
Asako in Ruby Shoes has a social (and even political in some way) commentary sort-of film but presents it in a less subtle, simplistic way that it certainly does not look like it is. It's masked in mundane narrative but one covered with heavy social issues.

The film looks at two characters who longs to be anywhere but here, who live mundane, dull lives dreaming of escape—one they seem to reach, virtually. These two lonely individuals, U-in—a civil servant who works on routines, lives in a big empty apartment, has no 'real' friends and is living away from family is sexually frustrated and lonely and Aya, a young woman preparing for her college entrance exams, has a partner-swapping parents, a brother stuck on manga who wishes to die.

But see, rain fascinates him (just as much as his co-workers), the light of his computer and even the happenings outside his room—reminiscent of the office life and tough "salaryman" duties while Mi-a, dully holds two pieces of eggs seeming to dismiss traditional femininity imposed on her and more to that, dismisses it as the film reveals her sexuality—a slap to U-in face.

In some way, Mi-a is also the total opposite of Aya. While Mi-a's rebellious look stands out, Aya is quiet and soft, meek-looking young adult. But ultimately, the very symbol of teenage angst—she wants to die. And die a death that she can choose as she believes that this is the greatest freedom one can have. While Mi-a actively lives the way she wants, Aya wants to die the way she wants, mysteriously, between today and yesterday.

It's interesting how U-in and Aya's relationship played out, starting from the screen, possible because of consumption and money. It seems like compared to Mi-a, U-in has control of "Asako", Aya's virtual identity, having the choice to zoom, pan, control the cameras and it seems like at some point, Asako responds to his command, much to his happiness—this shows how 1. the virtual reality provides comfort "for lonely men", reminiscent of the commodities present in Japan 2. how the two lonely individual connect through untraditional means (sex industry).

It's also interesting to know that Aya's ruby shoes or Alasakan background represent a fantasy. Like Dorothy's shoes, it seems to provide escape, a sense of illusion and fulfilment. But unlike Dorothy's shoes, it does not change anything for Aya—as shown when she just bought it and then a piece of chewing gum gets stuck on it. In a way, like Mi-a's hair, the sparkling ruby shoes seem to show something like a wish, fascinating illusion of escape. The two regardless of ethnicity, of place, of time—connect, made possible through the internet.

The underlying social commentary lies more with inter-ethnic and political reconciliation of the absence of the "South Korean women" in the film.