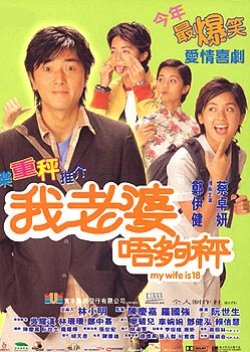 In order to appease their mothers, 30-year-old Cheung is getting married to 18-year-old Yoyo in London. Yoyo returns to Hong Kong to study and Cheung continues his work in London. The marriage is kept a complete secret. But things become complicated when Cheung returns to Hong Kong looking for work, and winds up teaching at Yoyo's School. Although Yoyo is enraged, she keeps their secret. As the one-year mark of their marriage approaches, will the love in their hearts overrule their urge for divorce? Edit Translation 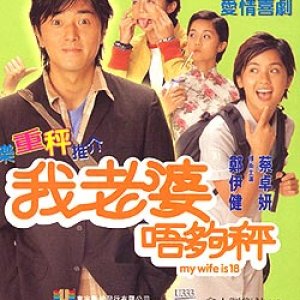 Completed
Senpai
1 people found this review helpful
Other reviews by this user
0
Jun 2, 2017
Completed 0
Overall 6.5
Story 7.0
Acting/Cast 6.5
Music 7.0
Rewatch Value 5.5
Somewhat humorous enough.
"My Wife is 18" is a delightful film because of its plot, but with that in mind, so it's also a very generic film for its genre. If you like romantic comedies, then "My Wife is 18" is a good choice for a movie to watch. But if you are getting an introduction to Hong Kong cinema then it is not the best of choices.
The story is about 30-year-old Sip-Sam Cheung played by Ekin Cheng, who is a long-time student trying to get his diploma. At the urge of his grandmother, he marries Yoyo Ma played by Charlene Choi, an 18-year-old college girl. And when Cheung starts working as a psychology teacher at Yoyo School, things really take a turn for the hilarious.
A good cast, though, with experienced actor Ekin Cheng opposite the young singer and actress Charlene Choi.
The chemistry between the protagonists on the screen was not as great as I had expected, but at least we saw the shining adjuvants that maintained excellent performance, such as seeing Richard Ng playing the teacher in the film, just a shame he only had such a small role . Bernice Liu playing Miss Lee was also doing a good job, and I wish they had given her a bigger role and more time on the screen because she really was well-publicized in her role.
All of the core essentials that make up the film are unsatisfactory for this special romantic Hong Kong comedy by director James Yuen. As such, "My Wife is 18" offers nothing new or innovative for the romantic comedy genre.