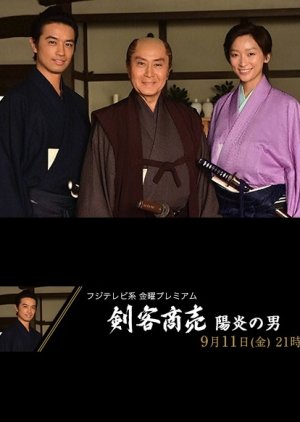 Akiyama Kohei, one of Edo’s best swordsmen, lives a leisurely life with his wife, Oharu, who is 40 years his junior. In contrast, his serious son, Daijiro, devotes himself to practicing at his own training hall every day. Sasaki Mifuyu, a female martial arts practitioner who dresses as a male, idolizes Kohei because she was saved from a predicament by him. She lives at the Izumiya dormitory of her mother’s family. But one night, an unknown wandering samurai breaks in although Mifuyu senses something amiss and thwarts the intruder with her quick wit. She is bothered about a dream she saw right before that about a man with an unknown face coming at her from beyond where the air shimmers with heat. Kohei saves a young samurai who had been attacked and roughed up by thugs at Okawabata. Then he learns that this samurai is Iori, the son of his pupil, Matsumura Sabanosuke, at the time he had opened a hall for training in swordplay at Yotsuya. When Kohei asks Iori about the circumstances, Iori tells him about dating Oteru whom he had met at a red bean soup shop two months ago. But because she is the only daughter of Kamaya Tatsukura, the boss of a perfume maker, who is also described as well informed about the Edo’s underworld, an angry Tatsukura has been after Iori’s life for laying hands on her. Kohei instructs his salesperson, Yashichi, to check up on Tatsukura. On the other hand, Mifuyu consults Daijiro about the house burglary. Daijiro investigates the sequence of events that led up to this dormitory falling into the hands of her mother’s family, and reports to his father. Hearing the situation, Kohei anticipates another break in and sends him to the dormitory to guard Mifuyu. Kohei then meets Tatsukura, who had made an attempt on Iori’s life. Edit Translation 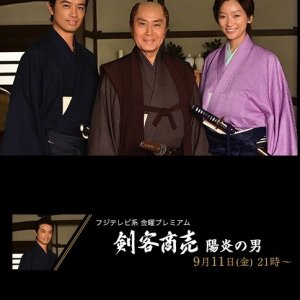