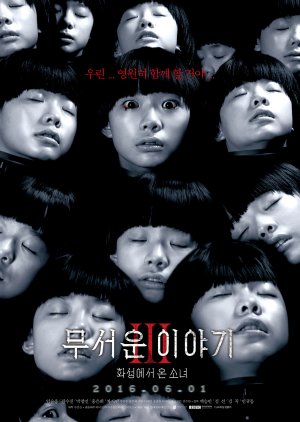 Completed
Kate
1 people found this review helpful
Other reviews by this user
0
Jan 17, 2020
Completed 0
Overall 4.5
Story 4.5
Acting/Cast 6.5
Music 5.0
Rewatch Value 1.0
I was amazingly confused while watching and not because the plot itself was hard to understand, but rather the direction this series of movies took looking back at Horror Stories (2012). The first Horror Stories was not exactly an amazing movie, but in a nice way it mixed horrors or reality, supernatural and thriller. It was grounded in a reality we could relate to. Second went more abstract but the stories still took place in a realm we know. This was just too edgy to comprehend.

[ Fox Valley ]
I liked the idea and the introduction to the story. The scenes made me feel uncomfortable and anxious, but with the alien sex scene, it lost all the charm and became a joke of itself. I love dark humor and horror comedy, if done right. This was sadly not.

[ Road Rage ]
Probably my favorite out of all the stories and the reason is quite simple: it was realistic. The things that truly may happen in real life are far more scary than anything abstract from other stories. The plot by the end made a full circle and it was enjoyable to watch. The switch of characteristics between the characters was a good plot point, which was nicely executed.

[ Machine Ghost ]
This part was also well done, but made the leading story that much confusing with the styling of the robots. That said, I always welcome a story that dwell on the themes of consciousness, free will and what make a human: human. When does the robot stop being a commodity to be used by people and should be treated as it's own being deserving rights that will protect him? Since the story is short, it is not a deep dive into such a broad topic, but it highlights some interesting aspects.

Overall, I would say it was worse than 1st movie, but better than the 2nd. The leading story was quite ridiculous and I truly disliked the costume and set design. It looked like a low-budget sci-fi movie and the reason for the stories to be told was also cheap.

Completed
noona
1 people found this review helpful
Other reviews by this user
0
Oct 1, 2018
Completed 0
Overall 8.0
Story 9.0
Acting/Cast 8.5
Music 8.0
Rewatch Value 7.0
It's best to act like the first part of the movie never existed, it was a mess. The director was really good, but the story was just a jumbled up mix of things. The second story was a high quality, original scary concept. It creeped me out a lot. The last story was a mix of horror and drama, I felt for the characters and I truly got into it. All of the plots were fresh and unlike anything I'd really seen before. They were masterfully directed and were pretty scary.
Was this review helpful to you?