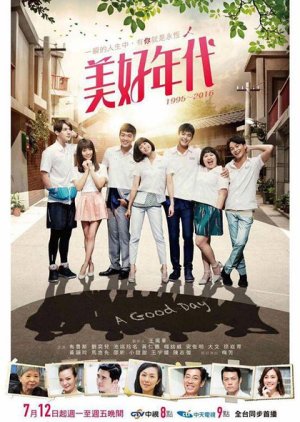 It's 2016 and a wedding is being held. A group of friends are reunited on this occasion nearly 20 years after their separation. Flashback to May 5, 1995, when they were still in high school. A Good Day tells the story of the youth and struggle of a group of friends that ultimately shapes their present adult lives. Can they find peace with their past and each other to reach a better tomorrow? Edit Translation 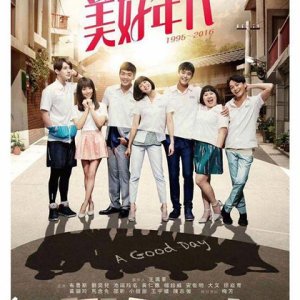 Ongoing 23/23
Vaanathi
2 people found this review helpful
Other reviews by this user
0
Aug 21, 2018
23 of 23 episodes seen
Ongoing 0
Overall 7.0
Story 8.5
Acting/Cast 7.0
Music 7.0
Rewatch Value 6.0
This was a series I have been searching for so long for the subtitles. I finally found them on YouTube and watched them in one day.

The story is basically about the friendship of four people - Wen Xiao Guang, Jiang Xin Yuan, Gu jun Peng, Wu Bo Qi. They areatight squad from childhood. Their friendship was literally the highlight of the drama for me. I loved the feel of drama. More than half of the drama is about their school period and has so much happiness bundled together. They reminded me of my school days.

The drama shows how love,time,distance affected the friendship.
Moreover their parents also share such close relationships that they almost share have the screen time with the kids. They are a caring bunch and their relationship with one another is another favourite point in this drama for me.

The female lead was quirky, cute as a button and i loved her. No wonder Gu jun Peng likes her from beginning ( nah it’s not as spoiler).
Gu jun Peng is dutiful,obedient well mannered and studious. He is been in love with heroine for so long.Then there is Jiang Xin Yuan ,class crook fooling around and wu BoQi the class clown both of them like class beauty Annie.
And buns their female friend also likes jun Peng . And our female lead as oblivious as a pumpkin just doesn’t know about a lot .And ughhhh The complications all theses lead to.
And there is entry of another male lead jie jie in the middle of the story. I can’t say more without spoil I g, if you do want spoilers do message me.

In this story no one is completely bad, even one who seemed to be was not as bad as it was made to look. It’s a close to heart drama.

The acting overall was good. I liked it but few emotional scenes looked artificial. But overall the story outshines the acting. I loved the female leadandother characters fit in too.

If you are in for romance , it does have a lot but I prefer their friendship rather than romance except for the female lead and male lead(one I shipped her with).

REWATCH VALUE
I probably won’t watch it because of the ending and moreover each episode is 1.5 hrs long and it felt like it went on forever especially in the latter half of the drama from ep 18. I’ll probably see just the cute scenes in the beginning.

This is my first review. If any faults do let me know! Thank you!