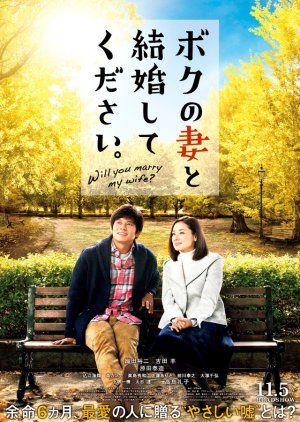 Shuji Mimura (Yuji Oda) works as a broadcast writer. He learns that he doesn't have much time left to live. He decides to concentrate on the future of his beloved family. Shuji Mimura's final plan is to find the best man to marry his wife Ayako (Yo Yoshida). Edit Translation 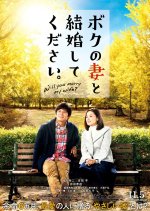 Completed
Senpai
2 people found this review helpful
Other reviews by this user
0
May 27, 2017
Completed 0
Overall 8.0
Story 8.5
Acting/Cast 8.0
Music 8.0
Rewatch Value 7.5
What can you say about something like that?
Based on the novel "Boku no Tsuma a Kekkon Shite Kudasai" by Takuji Higuchi (published November 15, 2012 by Kodansha). It is another adaptation, there is another, drama version of 2015 titled "Boku no Tsuma to Kekkon Shite Kudasai".
Well, I think love should be shared, "Will You Marry My Wife?" Conveys a comforting and painful story with an altruistic husband who is about to die decides to find a surrogate husband. I agree, seeing from a less conservative and selfish perspective is a noble attitude, since the wife was in full agreement. Instead of lamenting widowhood why not rejoice at the last legacy of her husband. Being both in agreement being two adults and a happy couple with the endorsement of the son and the new husband is a good story.
Unlike the drama, the film is lighter, not giving the viewer time to analyze the perspectives, yet it was consistent all the time, giving full coherence to the final part. As for the soundtrack, leaves a little to be desired, in the drama of 2015 for example, caused much more commotion.
Cast the height, well chosen by director Yoshishige Miyake, Oda Yuji and Yoshida You have formed a beautiful couple, I also can not forget to mention the good interpretation of all.
As for scenarios and cinematography I liked it, although nothing out of the ordinary is everyday and simple yet essential to give true to the film.
Generally speaking "Will You Marry My Wife?" Is a good movie, despite the controversial story it addresses may bother the more conservative, on the other hand it is a movie to be thought about, perhaps you will find yourself reconsidering when you realize how strong Shuji Mimura's love for his wife is.

New Topic
Be the first to create a discussion for Will You Marry My Wife?