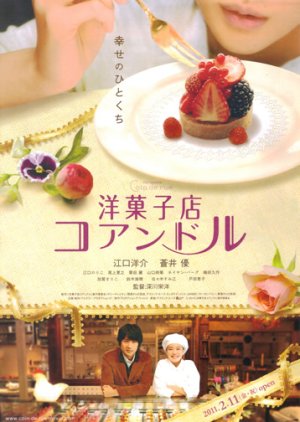 Tomura (Eguchi Yosuke) was once widely lauded as a legendary patissier, but some 8 years ago he inexplicably left the field. Since that time, Tomura has lectured at culinary schools and wrote a guidebook for pastry critics. Natsume (Aoi Yu) is a young woman who travels from Kagoshima to Tokyo to find her boyfriend. Natsume fins a job at "Patisserie Coin de rue" - a pastry shop run by husband & wife tandem Yuriko (Toda Keiko) and Julian (Nathan Berg). At "Patisserie Coin de rue" Natsume works with talented patissier Mariko (Eguchi Noriko) & her fascinating creations. Meanwhile, Tomura is now a regular at "Patisserie Coin de rue" & his encounters with Natsume brings about changes in both of their lives... Edit Translation 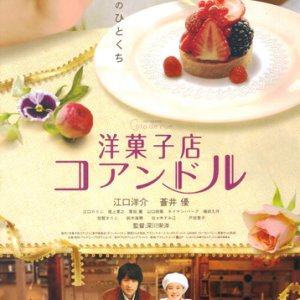 Completed
Lily_B
1 people found this review helpful
Other reviews by this user
0
Jul 17, 2015
Completed 0
Overall 6.5
Story 5.0
Acting/Cast 7.0
Music 4.0
Rewatch Value 4.0
The story is extremely predictable but it could have been made more interesting if it had been drawn out for ten episodes. In that case the characters could have been more developed and the plot could have been made more interesting with more interaction between the characters, sub plots and teamwork and the "we're all in this together, ganbatte!!!" feeling that can be cheesy or awesome depending on how all the details are dealt with.

If you like a typical coming of age story this might work for you. A character from a small town comes to Tokyo and learns to be more humble while learning a profession. It worked well for me with the drama Bambino! but not here. An apprentise and a master with a tragic past... it's almost painful how uninteresting it is, which is a shame because with good writing such a story can be so heartwarming. The movie begins with a sort of love story that is over early on, it's just the promt that starts the whole thing. The hero who steps in and saves the day is anothe obvious cliché... it was totally fine in Dinner, but here it was just meh. I realized as I was watching that I was thinking: "So much crying and shouting just for one bakery, why?" I should not think that. I should root for the main character and feel what she is feeling and share her passion when I watch a movie! Another thing that annoyed me was that the character Mariko made absolutely no sense at all. Poor girl. I'm sure there was something about her, but I could not figure out what.

If you're thinking about watching this movie just for Eguchi Yosuke, don't bother. What a waste, anyone could have played that role and it wouldn't have made a difference.

BUT I have to admit that I LOVED the cakes and the scenes where the characters were seriously working hard in the bakery. It was absolutely beautiful. (In fact, as soon as I have finished typing this I'll google to see where there are ant bakeries in the city where I'm staying right now!) If you like this kind of eyecandy, this movie is not a complete waste of time. I had high hopes for it and it didn't disappoint as far as the cakes are concerned. It's almost worth rewatching just because of that. Or not. I really wish this had been a drama instead of a movie.