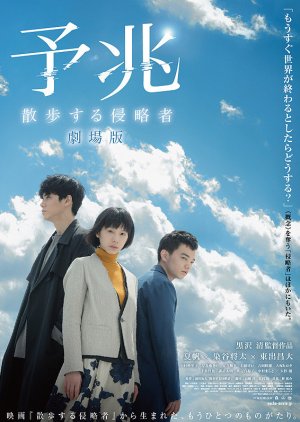 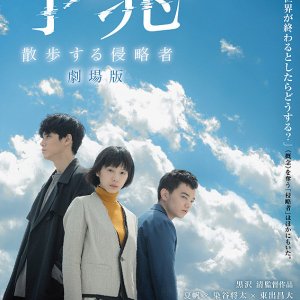 Completed
Man_Chair
0 people found this review helpful
Other reviews by this user
0
Oct 4, 2019
Completed 0
Overall 8.0
Story 7.0
Acting/Cast 8.5
Music 9.0
Rewatch Value 10
This review may contain spoilers
Yocho (Foreboding) utilises the sci-fi 'body-snatcher' trope to reveal the atavistic vacuum common to mankind; when human constructions such as 'family' and 'pride' are stripped away, we are little more than phantoms, shells of our former selves. When Makabe points out that he no longer needs to tap someone on the forehead to reap concepts from them, this may have been a double meaning; in the face of the impending invasion and the possibility of losing what is precious to them, Etsuko and Tatsuo's actions gradually break away from what may be considered humanly moral, such that 'Love', the concept that Makabe ultimately cannot obtain, proves to be both mankind's salvation and downfall.

This is a relatively understated horror film where hardly any blood is shed- the true fear comes not from jump-scares but from aspects such as slowly moving camera shots and unnerving diegetic sounds. A singular point of light and a collapse to the floor is used when a human is 'reaped' of a concept. The sense of 'foreboding' crescendoes into scenes such as Makabe's 'stroll' through the hospital, which are simply executed (the humans around him simultaneously falling comatose) but captivatingly frightening (thanks to the dead silence, save for the beeping hospital gear, a few hushed screams and Makabe's footsteps.) While the invasion (in this film at least) is set on a small scale, Kurosawa broadens the scope through well-placed intermissions; unnatural weather, shots of the moon seemingly dissolving, and the final thunderstorm that envelops the protagonists.

Kaho and Sometani once more exhibit excellent acting- Kaho as the everywoman whose love for her husband transcends her overwhelming fear and then her moral code, Sometani as the agonized everyman who chooses short-term relief over the painful confrontation of his own weaknesses. However, their chemistry as a couple left more to be desired, especially considering the great duo they made in the sex-comedy 'Minna! Esper Dayo!' (which, funnily enough, also contained an alien invasion.) Had their chemistry been at this calibre, Etsuko's motivations would have been given more strength. Higashide was captivating as Dr. Makabe; he strolled through the uncanny valley in a body that was clearly not inhabited by a human soul. His alternating deadpan ruthlessness, invasive curiosity and childish delight were frightening.

Nonetheless, Yocho is brought down heavily by a few critical flaws. Being cut down from a WOWOW tv drama (which sadly hasn't been subtitled), certain transitions seem poorly pieced together- but this doesn't account for an overextended opening and a disappointingly rushed conclusion. While the soundtrack was excellent and well placed, certain scenes could have had more than just silence to further the sense of malaise- or foreboding. The fascinating notion of human concepts being 'reaped' by aliens should have been explored, as with Etsuko's friend, beyond the human merely falling into a deadened slump- how does a human who has lost 'past' and 'future' continue to live, for instance? How does one behave if they've lost all fear, even of death?

Completed
Senpai
0 people found this review helpful
Other reviews by this user
0
Jul 10, 2018
Completed 0
Overall 6.5
Story 6.5
Acting/Cast 7.5
Music 7.0
Rewatch Value 5.5
Tetsuo's announcement that this is just the beginning is not an empty threat. All bad anticipations are absolutely justified - those of the protagonists and those that adjust to the public after the solid kick-off. At first, Kurosawa builds tension and mystery with conventional but effective means, destroying it so brutally that it brings history intertwined on the verge of self-parody.
Although Kiyoshi Kurosawas has taken the basic idea of his sci-fi thriller away from the well-known genre classics, he is still performing well at the beginning, thanks to the staged reenactment. However, before they can develop stories or characters, over-explanation, broken logic, and abstruse phrases break the foundation of a fun B movie. To make a solid premise of a coherent whole, the director is unfortunately missing the concept.