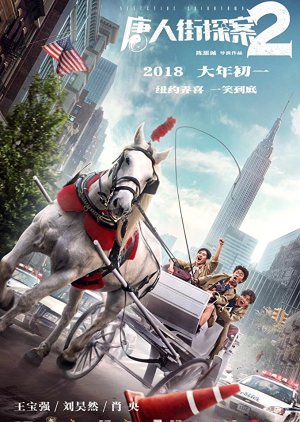 A follow up to the Chinese hit "Detective Chinatown," the new film reunites writer/director Chen Sicheng and stars Wang Baoqiang and Liu Haoran, who reprise their roles as detectives Tang Ren and Qin Feng, respectively. When the case of New York Chinatown godfather Uncle Qi's missing son turns into a murder investigation, the detective duo Tang and Qin team up again to hunt down the killer--this time with some help from the International Detective Alliance. Edit Translation 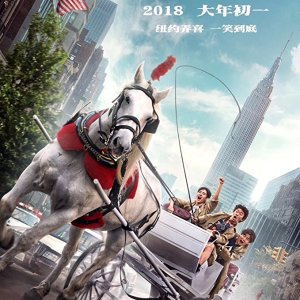 Completed
Jasmine
3 people found this review helpful
Other reviews by this user
0
Feb 22, 2018
Completed 0
Overall 7.5
Story 7.5
Acting/Cast 7.5
Music 8.5
Rewatch Value 7.5
This is the current king in the Chinese box office, and is one of four major films that were released on Chinese New Year's. It's a sequel to the surprise box office hit Detective Chinatown back in 2015, and I have to say I didn't enjoy it as much as the first. It was still enjoyable though, and is a perfect holiday movie to watch with friends and family, especially since it has some very distinct Chinese elements. (Yes, I've been on a total Liu Hao Ran kick since NiF2 and have chased down almost all of his projects accordingly).

Set in New York, the story continues to follow the unusual pairing of young genius Qin Feng (played by Liu Hao Ran) and his crazy distant uncle Tang Ren (played by Wang Bao Qiang)  as they try to crack a serial murder case. As you can imagine, it's hijinks and antics galore as they cause mayhem all around NYC. I'm a little disappointed with Tang Ren's characterization in the film - sometimes his shrillness and unneccessary comments get a little too grating. Hopefuly this is something that director/screenwriter Chen Si Chen will consider when he writes the screenplay for the third film - given that actor Wang Bao Qiang is his close friend, I doubt that he wants to short change him.

The director clearly wanted to create more of a "detective world" in the film, and we are introduced to several international detectives that we will surely see again soon. It's also becoming clearer that Qin Feng is the real star of the story as the young prodigy detective, but they also need Tang Ren's contribution to the comedy side, and I feel like that's going to be harder and harder to balance for future installations.

Still, this was a fun movie and if you enjoyed the ridiculousness of the first I think you'll like this one as well.

Completed
Misunderst0_od
1 people found this review helpful
Other reviews by this user
0
Feb 22, 2018
Completed 0
Overall 7.0
Story 6.5
Acting/Cast 8.0
Music 8.0
Rewatch Value 6.0
Detective Chinatown 2 is not quite as good as the first movie, but it is still laugh out loud funny and entertaining.  It still has the same classic, ridiculous humor as the first one.  Watching the main characters run around New York trying to solve a murder mystery and landing themselves in ridiculous situations is worth watching.  Add in the cast (some old, some new) and some fun music and you've got yourselves a solid good movie.  The actual storyline part of it was a bit weak considering there were a lot of characters and a lot going on, but it was still decent overall. Although this is a sequel, you do not have to watch the first movie to see this one.  You might miss out on a few jokes, but it wont affect your understanding of the plot at all. 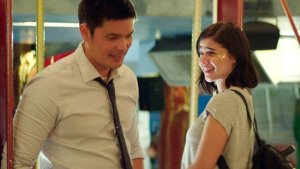