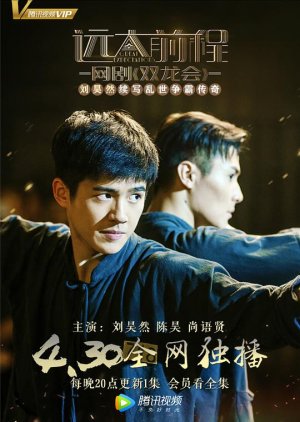 It revolves around a young kid named Chen Zheng who encounters a fourth generation Shanghai magnate named Huo Zhen Xiao in prison. Due to the warring factions and the complicated situation that they're in, the two are forced to set aside their misunderstandings to team up in a story full of passion, youth, bravery and growth. (Source: ChineseDrama.info) Edit Translation 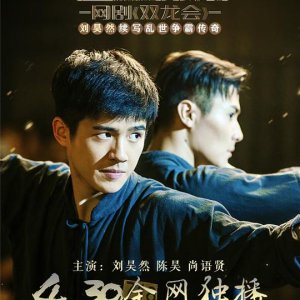 Completed
Jasmine
10 people found this review helpful
Other reviews by this user
0
May 20, 2018
6 of 6 episodes seen
Completed 0
Overall 9.5
Story 8.5
Acting/Cast 9.5
Music 9.0
Rewatch Value 9.5
This is a web-exclusive side story to Chen Si Cheng's Great Expectations, and was originally supposed to serve as a teaser for the third and final part of that drama by introducing a new pair of characters. Simultaneously, it can be seen as Chen Si Cheng's gift to Liu Hao Ran's fanbase, as well as a way to introduce two of the other actors in his agency - Chen Hao and Shang Yuxian (more the former than the latter). Despite the fact that it's a quick side story that was filmed in just a couple of weeks, it's clear that there was a lot of heart and effort put into this - and the result is that we get a quality, short, six episode mini-drama that has a cinematic quality to it and clocks in at just around 120 minutes in total.

Set in Tianjin in the mid to late 1920s (Republican era), we are introduced to Huo Zhen Xiao, who is the estranged son of legendary mob boss turned business tycoon Huo Tian Hong (a character in the main drama) - and his mom, who left his dad years ago and raised Huo Zhen Xiao on her own, is also descended from a long line of gangster bosses. As a result, nineteen year old Huo Zhen Xiao is a young man who grew up in wealth and was raised to fear nothing and no one - and to make things even more interesting, he happens to be enrolled in military school in a time when much of China was in turmoil due to the May Thirtieth Movement (wiki it if you want to learn more - it's an interesting part of Chinese history that isn't covered all that much in dramas or film). Huo Zhen Xiao and his three military school buddies don't actively participate in the anti-foreign demonstrations, but they make their stamp in the movement by using their fists to fight back against the foreign police and protect their fellow citizens from the terror.

As punishment for fighting back against the foreign power, Huo Zhen Xiao and his buddies are sentenced to Tianjin's most notorious prison for four months. And that's where the bulk of the story lies - Huo Zhen Xiao's adventures in TIanjin's cruelest prison, and his encounter and budding friendship with fellow prisoner Chen Zheng, who is an orphan and grew up on the streets.

If there's one thing Chen Si Cheng is really good at with his scripts, it's pacing - and while you can never say his storylines are original, he's able to inject something fresh and innovative to it. In the case of Twin Dragons, he took advantage of the fact that this is web-exclusive and isn't necessarily held to the same restrictions that dramas shown on satellite TV are held to - so he pushed the boundaries a bit both in terms of the storyline and the characters, which I really enjoyed. Not to say there aren't bugs or holes in logic - but the fast pace of the story and the interesting characters (and phenomenal acting) makes it easy to overlook the issues. Plus - it's a short, side story of a drama - we really don't need to think too much about logic here.

Huo Zhen Xiao was a fascinating character - he was the protagonist and had a patriotic bent due to his military school education, but at the same time there was a cruel streak in him that was the result of his background as the son of mob bosses. While I loved the heroic side of him - he's an awesome fighter, intelligent, and so, so fangirl worthy - I also loved that he saw the world differently from most of the Republican-era heroes we are used to due to his unique background. He very much follows the philosophy of an eye for an eye, and had some moments that just made your jaw drop because of how...mobster-like it was.

The character of Chen Zheng was also really interesting. Much like Chen Si Cheng's Hong San Yuan in the main drama, Chen Zheng's character is an ode to Wei Xiao Bao of Jin Yong's The Deer and the Cauldron. He's a ruffian with street smarts in spades, and probably has committed many petty crimes in his past - but he still has somewhat of a moral code. While he's at odds with Huo Zhen Xiao initially (mostly because he can't beat him), their budding friendship and respect is awesome to watch, and I really, really hope that Chen Si Cheng saw the praise that Twin Dragons got online and will allow us to see these two characters and their adventures again one day.

Also - can I just say I love the cinematography of this? I looked it up and apparently that's the director's specialty. The whole thing just felt very film-like.

A thousand cheers for Liu Hao Ran, who basically elevated this short drama to another level with his potrayal of Huo Zhen Xiao. The storyline is interesting, but its various flaws and bugs would have been a lot more noticeable if it wasn't for the sheer magnetism of Liu Hao Ran's acting as the young mob boss prince who doesn't back down from anyone. This drama was filmed shortly after NiF2 wrapped up, and the progress that Liu Hao Ran has made as an actor is extremely noticeable here - and he has a presence and charisma that makes you forget he was only nineteen when he shot this. This is the performance that made me want to see him as an antagonist one day - because there are several moments when Huo Zhen Xiao's mean streak peeps through that makes me think Liu Hao Ran would be able to handle a character on the dark side.

Chen Hao is awesome as well - it's pretty much his first introduction to the industry as his other acting projects haven't come out yet, and he was absolutely fabulous as the wise-cracking Chen Zheng who has big dreams but feels dragged down by his reality. While Liu Hao Ran's Huo Zhen Xiao got the cool parts, Chen Hao was responsible for carrying the comedic element of the show and he was able to do it well without overacting.

Both young actors also definitely benefited from the fact that the screenwriter is their boss, haha, as he wrote the characters with both of them (and their acting abilities) in mind.

The other cast members were great as well - particularly the antagonists, who were so, so creepy and twisted - but man they carried it well. Also Huo Zhen Xiao's mom is all kinds of fantastic.

I'm impressed because despite the fact that this isn't an official drama, the music was great and matched the scenes perfectly (props to the editing team).

I absolutely loved this - not just because of Liu Hao Ran, but because I really do think that you can see the effort (and budget) put into this reflected in the quality of the production. Using only six twenty-minute episodes, we got a pretty complete short story with characters that felt alive - and I walked away from this wanting to see more of Huo Zhen Xiao and Chen Zheng, and how they take on Shanghai. If you like the premise and are in the mood for something fun and intense in the early Republican-era, I absolutely recommend checking this out.