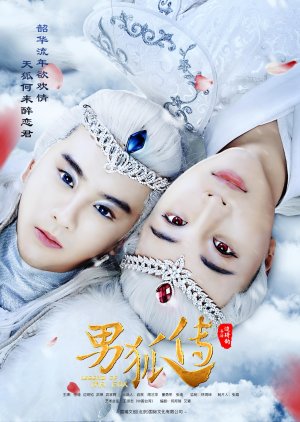 Thousands of years ago, a magical drum was made by the fairies of the Red and Celestial Fox tribes. The drum holds great power. Sometime later, the Celestial Fox tribe's fairy is murdered by a Red Fox tribe member, with the fairy's bone and soul been taken away. The leader of the Celestial tribe has sworn revenge and sends Ouyang Zhou into the human world to find the magic drum and their fairy's bone and soul. But while in the human realm, he meets Qiaoyan and Mige; who both for some reason, have connections to the fox spirit world. Edit Translation

Who allowed someone to make this? And who allowed me to watch it?

Non Spoiler Part -
STORY: This had a lot of potential, but in the end became really disappointing. The writing was kinda bad. It didn't portray any emotion. As I am writing this there is no synopsis available (I’ll add one after I write this), so I went into this completely blind. And I immediately became confused. It was like the writer’s expected you to know what was going on. It took me like 30 minutes to figure what this story was about. FUCK SAKE I AM SIMPLE MINDED HOW DO YOU EXPECT ME TO KNOW? Also, sometimes it felt like you accidentally missed an entire scene. It was really jumpy. The plot itself was good enough, but it was just poorly written. Pff, overall meh.

DIRECTING/EDITING: BASIC BASIC BASIC. I swear if I have to look at another shot reverse shot I might puke. It wasn’t enticing but bearable. It just became continuous. Some transitions were really awkward as well.The special effects were okay-ish for a small budget movie.

ACTING/CASTING: Some acting was okay-ish. Bearable. Some of it was really bad (like in the fight scenes). Emotion wasn’t displayed well enough. A lot could have been improved on but whatever. The guy who played Ouyang Zhou was probably the best.

MUSIC: I didn’t really care about the music. I was to focused on the movie's shittiness . But I’m guessing the music was average.

REWATCH VALUE: I will probably never watch this movie again. Because there is nothing to rewatch. No special scene that made my heart flutter. NONE.

OVERALL: Disappointing. Nothing that memorable. However, it was a good enough to pass time. Watch it if you want, I don’t really give a shit.

MY THOUGHTS ON THE ENDING (kinda a spoiler):

I know China likes it’s sad endings with these types of movies. But normally after those endings I cry or feel empty inside. HOWEVER I FELT ABSOLUTELY NOTHING. I just stared at the screen like, "the fuck?" And I believe there to be three reasons to why that is~

First reason: The acting. I felt nothing when it came to the acting. No special place in my heart. They portrayed emotions quite badly. The characters didn’t really appeal to me. There was no connections or chemistry. The skin ship (aka shoulder touching) felt forced and faked. The scene where Mige was crying and punching the punching bag should be a very emotional scene. But it wasn’t. He should be displaying all his anger, sadness and frustration on this punching bag. But instead I was laughing.

Second Reason: The writing. They did terrible at expressing the character’s emotion. I feel like this was my level of writing. And I am absolutely shit at writing (if you couldn’t tell by this review). They had so many opportunities to make me cry, to make me feel something, ANYTHING but instead I was blank. Probably worse than the acting.

Third Reason: The clothing. I know this probably isn’t a big deal. But to me it is. Mige looked like he was in pyjama pants half the time. Also, this links back to the scene where Mige was crying and hitting a punching a bag to let out his frustrations; BUT HOW THE ACTUAL HELL DO YOU EXPECT ME TO FEEL EMPATHETIC TOWARDS HIM WHEN HE IS WEARING A GREEN MESH SHIRT WITH A FORMAL WHITE BLAZER WITH SOME CHEAP ASS GOLD ON HIS NECK THAT I KNOW IS FAKE? Ahhh, who dressed these people?

Due to that I was unable to feel unhappy by that ending and also thanks for wasting for your time reading this shit review. YAYYYYYY.

New Topic
Be the first to create a discussion for Legend of Mr. Fox