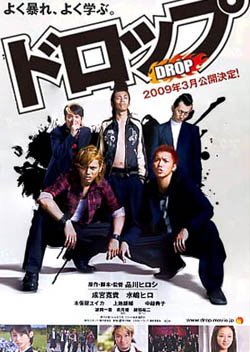 "Drop" tells the story of a boy named Shinanogawa Hiroshi (Hiroki Narimiya) , who grew up in the 1980s. He became inspired by the Be-Bop High School manga and decided to become a delinquent. Hiroshi dropped out of a private middle school and transferred to a public school. With his hair in a very shot hairstyle dyed to red, he attracts the attention of the schools gang lead by Iguchi Tatsuya (Hiro Mizushima). After a fight with Tatsuya, Hiroshi ends up joining their delinquent gang. What follows is the story of friendship and making the right choices. Edit Translation 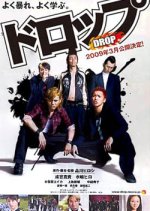 Completed
blackstar_aria
8 people found this review helpful
Other reviews by this user
0
Feb 8, 2012
Completed 0
Overall 7.0
Story 6.0
Acting/Cast 8.0
Music 8.0
Rewatch Value 5.0
Drop was hilarious. Lots of blood and fighting, like Majisuka Gakuen but with ikemen and without that whole pretentious story line of why they fight. Chuck full of shonen comic references, if this was not a shonen comic, it really felt like the target audience is young boys. This movie is literally bare bones boys fighting and protecting their pride.
What I liked was the honesty in the characters. As a true dramanista, I am always looking for the scheming friend, the evil mother, the rat in the group but there was none of that. The characters literally said out loud exactly what they felt, and it was refreshing. Narimiya Hiroki is an awesome actor! This type of character for him is not new (Yankee-kun to Megane-chan) but he is so believable even if you do see his wrinkles. He really brought the main character to life. Although the other supporting characters were to be stereotypical, they played their parts very well and I forgot i was watching actors at times. I must admit that started this because I love Mizushima Hiro. As much as I loved to watch him in this movie, his character fell flat. It could be the fault of the writers, but his character seemed under developed or maybe the character was supposed to be vicious/crazy but Hiro couldn’t commit to it. IDK. I may blame the writers because they introduced a lot of characters that have no development, no story line and then randomly appeared/ disappeared.
The main question on my mind while watching, “Why are they using fully grown men to play middle schoolers?” I know some of those dudes are in their 30’s! I mean these dudes had full facial hair but playing 15-17 year olds??!! I also couldn’t understand how some characters were not getting physically stronger with all the fights, like how are you remaining so weak but you can still run your mouth? Not to mention how cool the parents were with all of this, your son wants to become a delinquent and you say “ok!”?. To top it all off, there is a sudden sorrowful scene out of nowhere that causes major changes. (I had the stupid face on because I didn’t really see it coming).
There were certainly loose ends, unraveled strings, and frayed stitches, but it wasn’t boring. For a story that seems meant to tell young boys “life is short don’t waste it” I think it does a pretty decent job. However it gets a fat F for encouraging ruthless violence for younger ages. I, however am not in that demographic and anything that gives me a little eye candy while entertaining me, I say “bring it on!”. I do recommend the movie for a break from the complex story lines, the plotting and the scheming found in many of the dramas we see. Overall: Lots of cool real fights, loads of excitement.

Completed
arashinta
0 people found this review helpful
Other reviews by this user
0
Nov 19, 2019
Completed 0
Overall 8.0
Story 9.0
Acting/Cast 8.5
Music 8.0
Rewatch Value 7.0
This review may contain spoilers
[WARNING: the rating and review I give have the possibility to be subjective due to my preference for the genres, scenes or casts]

Well, after all, this is a very interesting movie. A lot of fighting scene, but a lot of comedy scene too. For example, a delinquents who did a rock-scissors-paper to decide fighting order is so epic for me (^o^)

The minus point for me … hmm … the casts are too old for middle school students (^_^;) Their acting were great, but the face is too old (ᵔ.ᵔ) (for me) The other minus point, why this is just a moviee?? Make it a dorama please (^o^)

New Topic
Be the first to create a discussion for Drop