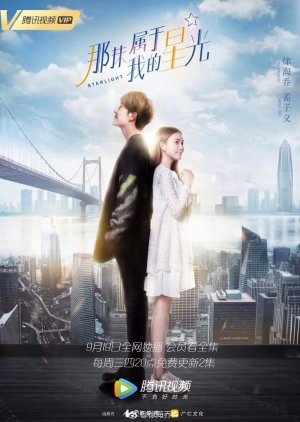 Completed
dedth
2 people found this review helpful
Other reviews by this user
0
Feb 25, 2019
20 of 20 episodes seen
Completed 0
Overall 7.5
Story 7.5
Acting/Cast 8.0
Music 7.0
Rewatch Value 6.5
I don't think that Starlight is anything particularly new or spectacular. It's a good and cute short drama that is good a a filler watch. It's not bad though, just not particularly extraordinary.

Without giving any spoilers, I wish they had explored some aspects of the story line a little bitter deeper. And I wish it was a bit more consistent. Like the female lead is supposed to be some math wiz but she works as an assistant for some actor after she lost her accounting job, but like at the end she doesn't try to go back to an accounting job or anything of the sort. It hardly gets mentioned again. And despite her being a book smart character she's really has no common sense. That's not the only aspect of the story I wish they explained more or was more consistent with, there's a brother (without specifying further as to avoid spoilers)I wish they had played that up a little bit more, it felt like they used this part when they couldn't think of anything else to further the story.

Though, the romance aspect is cute and fluffy as expected! So that's good.