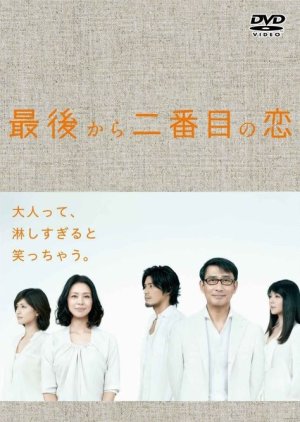 Completed
Lily_B
10 people found this review helpful
Other reviews by this user
0
Mar 31, 2014
11 of 11 episodes seen
Completed 0
Overall 8.0
Story 7.0
Acting/Cast 8.0
Music 6.0
Rewatch Value 4.0
Saigo kara nibanme no koi is a very good drama. It’s quite simple (while you could say that most of the characters’ relationship statuses can be described as “it’s complicated!”, the plot is not at all complicated to follow) with interesting characters and funny situations. It’s not a comedy that will have you rolling on the floor laughing, but it is sometimes hilarious in a quiet sort of way.

Yes, there is romance as stated on the drama information page, but it is also about family and friendship. There is the Nagakura family – four siblings and the oldest brother’s daughter – who often argue and banter but love and care about each other deeply, and then Chiaki comes to live next door. Romance leads to friendship and friendship to romance, and there’s romantic friendship that leads nowhere; all this is sort of obvious from the first episode. What surprised me was not the romance theme, but rather the friendship and family themes, and the warmth and humor throughout it all. In the end, this drama is about family: The kind of family that you chose and create for yourself.

This is a drama about adults. The main characters are all between 35 and 50, so if you’re used to watching dramas about young love and high school kids, you might think that this is not for you. Well, personally I appreciate variation and I like watching dramas about people older than myself sometimes. I think this drama can be enjoyed by anybody no matter the age. Also, this is a drama without evil and scheming second leads. Well, there are second leads and some weirdo characters, but nothing that will make you want to scream with frustration.

The characters are all very likeable, even though they’re pretty odd. The older Nagakura brother cares a lot about appearances and always tries to think about what’s proper and responsible, but at the same time he also does things he doesn’t always quite understand, out of love. Also, he has a hard time saying “no” to things, he’s a nitpicker, and somehow he can’t seem to be near Chiaki without picking a fight with her. The twins are also nice people: Shinpei who is an “Angel”, because although he’s scared of commitment, he is very “helpful and generous” and aims to make as many women happy as possible (yes, if it’s sex they need, that’s what he helps them with, although it could just as well be some company). All this is done with a sort of innocence and naïveté – he doesn’t quite seem like the typical womanizer even if that’s sort of what he is – that probably only works so well because of the general atmosphere of this drama. Even though you like the characters and feel for them, you can’t take this too seriously.

This is especially true about the twin sister, Mariko. You’d barely recognize Uchida Yuki under all that hair and the crazy clothes… Mariko is… special. At first I thought she was mentally disabled, perhaps she is but she’s also smart and observant. She’s not a complete recluse but she’s scared of people sometimes, and she's very fidgety, with her smartphone glued to her fingers… I just don’t know what’s “wrong” with her, but I guess not even the drama writer knows that… ;) Sometimes I found her a little bit too much but I loved her. The fourth sister is also an important character, but her plotline is a bit more typical that Mariko’s: She’s the rebellious housewife who is tired of being taken for granted by her husband and son. What I like about this drama though is that all of these characters are important and all storylines are completed; you don’t lose interest for anyone just because someone else gets too much screentime.

(As for the other supporting characters, not all of them are fully developed, but that’s not to be expected I guess. Chiaki’s friends are just there as a background, because there needs to be scenes where she can talk about things that are happening…)

Chiaki is a drama producer and there are also scenes from her office. It is mildly amusing when characters in a drama talk about a drama and about things that should or should not happen in one…

Also, I have to give this drama a special gold star in my book for stating openly that yes, sometimes a woman can fall in love with another woman. This is not a huge thing, but it is there, and this is the first time I have seen anything even remotely like lesbian love in a j-drama. Well, it might be there just because of the “comedy” that comes out of it, but it’s still undeniably there.

As always, there’s not much I can say about the music, but at least I did notice it this time around. There were mostly just the same two or three songs that played, but they added to the atmosphere and I liked them, for what it’s worth.

To be honest, I started watching this drama as a first step of stalking Koyzumi Kyoko, but I really did enjoy it and not just because of her! Now I’m looking forward to the special, and then let’s just hope we’ll get subs for season two this spring! The ending made me want to know what’s going to happen next, or rather, I just don’t want to let go of the Nagakura family yet!