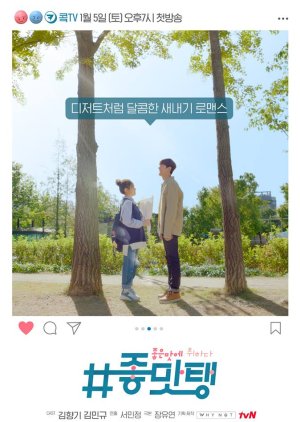 Completed
PHope
4 people found this review helpful
Other reviews by this user
0
Feb 9, 2019
10 of 10 episodes seen
Completed 0
Overall 7.0
Story 7.0
Acting/Cast 8.0
Music 5.0
Rewatch Value 5.0
A Web Drama that sums up into two hours drama. The story is overall cute and it focuses mostly on the romance, though the social media refrences were cute too. The performances were good also from all the actors and actresses, even from the ones on the side stories. However, even though the main story was completed, the side ones were left uncompleted. There so many questions left unanswered, that only makes me think that there might be season two. Part from that, the drama was well executed overall.
Was this review helpful to you?

Completed
twinsizedmattress
1 people found this review helpful
Other reviews by this user
0
Feb 17, 2019
10 of 10 episodes seen
Completed 0
Overall 7.0
Story 6.5
Acting/Cast 7.5
Music 8.5
Rewatch Value 5.5
This was a light, fluffy 2-hour show. The barely-there plot it had was made up for by an attractive male lead and cute, easy-going moments. It truly felt like there should be an extra episode or more of a solid ending (it ends very abruptly) While some things felt like it needed a little more of a wrap-up, that's what you get when you ask for a short and sweet story. Favorite part was definitely the parody of Goblin :) The side-plot of the older sister is lacking, while the main FL and ML story is purely about friends turning to lovers.
Was this review helpful to you?

Completed
ivy
0 people found this review helpful
Other reviews by this user
0
May 23, 2019
10 of 10 episodes seen
Completed 0
Overall 7.5
Story 7.0
Acting/Cast 8.0
Music 9.0
Rewatch Value 7.5
This web drama literally made me feel Drunk in good taste. It was light, fluffy, and sweet overall. I like how they're portraying normal university students and university life in a non-exaggerated way. There was barely any plot but I think the shortness and the preciseness of the show made it worth watching! This is a drama to all the sweets or dessert lovers out there. I'm sure you guys can relate to this drama.

The leads were just overall cute, they're very compatible to each other and i love it that their cuteness is not cringey. Minkyu's acting has improved a lot! He should be getting more drama love calls after this! i dont know if its just me, or maybe its part of the roles they're playing but the only problem for me was the bakery manager and the sister their expressions were too stiff and awkward they're like stones.

The songs they used in this drama were very pretty too! It matches the scenes very well! I was surprised they used The Man BLK songs in some of the scenes. Minkyu's OST was very good too, i love his voice so much, thank you for giving him a chance to showcase it in this webdrama! ~

Overall I give it a 7.5/10, the desserts that were featured were all too sweet and tempting, that i craved for dessert instantly!