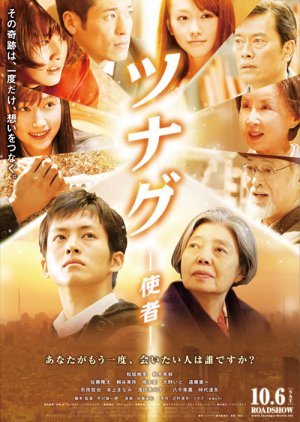 Completed
BrightestStar
1 people found this review helpful
Other reviews by this user
0
Oct 16, 2014
Completed 0
Overall 7.0
Story 6.0
Acting/Cast 9.0
Music 7.0
Rewatch Value 4.0
This movie is about following Ayumi, an apprentice connector (Tsunagu) with his first cases of giving people that one chance to meet with someone who has already passed on. The story itself is sweet, the setting shifting from being realistic to being somewhat mystical.

I wasn't impressed with the writing. the dialogs were too long and the stories bounced from being sweet to being overly sentimental. Some of the stories were pretty standard while others were better. Personally my favourite was that of the two highschool girls. It contained so many complicated emotions and didn't settle to be convenient. There is also the mystery behind Ayumi's parent's death that seems to haunt him, which had an interesting reveal, could've been given a darker more interesting twist.

On the acting department it did not disappoint. I originally wanted to watch this movie for Matsuzaka Tori and he did a great job here + he has the cutest smile EVER! Seeing the heartwarming Kiki Kirin in it brought me so much joy. There is also Hashimoto Ai with weirdly huge eyes blowing me away with her acting. The rest of the cast did a great job with their characters as well.