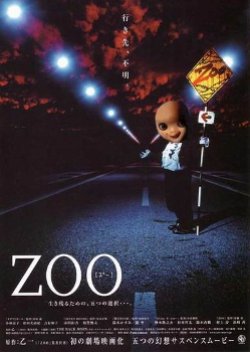 This collection of shocking, unpredictable stories feature the first screen adaptation of the number one young author of his generation, Otsuichi. Working with five different directors, ZOO features five stories (four live-action, one animated) of fear, sadness and pain. "Zoo" A man kills a woman at an abandoned zoo and takes pictures of her dead body everyday. Then suddenly the zoo is gone and the line between reality and fantasy becomes blurred. "Kazari and Yoko" The mother of twin sisters, Kazari and Yoko, loves only one of her daughters, and abuses the other. When the abused tries to break free, things take shocking turns. "Seven Rooms" One day, a young boy and his older sister find themselves trapped in a small, concrete room. There are seven rooms in all, each containing a different prisoner. On the sixth day, everyone will be massacred. Can they survive? "So Far" A young boy's father is convinced that his mother is dead. The mother is convinced the father is dead. The boy is the only person that both father and mother can see. "When the Sun Shines" CG animation about a unique man learning about life and death in a world where most of humanity has already died out. -IMDb Edit Translation 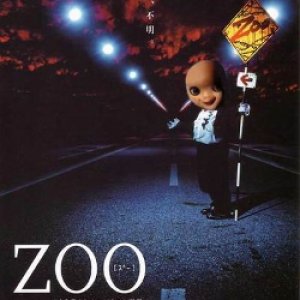 Completed
ZDorama
0 people found this review helpful
Other reviews by this user
0
Nov 24, 2016
Completed 0
Overall 7.0
Story 7.0
Acting/Cast 10
Music 10
Rewatch Value 7.0
While high on my “Ryoko Kobayashi” fan mode after her terrific performance in the supernatural revenge thriller MAOU, I found she’d starred in a similarly spooky Twilight-Zone styled movie called ZOO in one of its five stories. That sounded interesting, and, happily enough, I was able to acquire a nice subtitled version!

Well, in the end, Ryoko’s story (a tale about a set of twins, both played by her) ended up being so-so, and I’m sad to say that statement rang true for most of the other segments, too. In fact out of the five, I only really liked a couple of them- the story SEVEN ROOMS starring Yui ichikawa as an abducted girl in a mysterious holding cell, and segment Four which, in direct contrast to the other tales, was a short clip that was completely animated...It was this story that TOTALLY MADE THE MOVIE FOR ME!

This chapter was called HIDAMARI NO SHI, a story written and animated by Mizusaki Junpei and featuring perfect voice acting by Suzuki Kasumi and Suwaru Ryu. Hidamari No Shi tells a tale of a Scientist and his Robot Girl creation in a futuristic world not so different from our own...

The great charm of this clip is the pacing. As the girl goes about her daily life, the viewer is allowed to look about and take in the scenery along with her, examining what she is examining, reacting as she reacts. Every action is deliberate and precise, every sentence of dialog meaningful and heartfelt, and as I’ve stated before, the voice talent is just awesome, fully fleshing out the animated characters onscreen and making the girl seem real and believable.

The story of HIDAMARI NO SHI is ultimately a philosophical one, for though the girl’s days are spent doing chores like laundry, tending the garden and fetching the water, there are also rabbits and butterflies in her life to observe and chase, sunrises and sunsets to experience, and the quiet, beautiful sound of wind-chimes as they tinkle in the breeze. Yes, he’s created her to cook and to clean, but beneath it all is the lesson he wants her to learn most, and that is the joy and gratitude of simply being alive.

New Topic
Be the first to create a discussion for Zoo