Gegege no Kitaro: Kitaro and the Millennium Curse (2008) 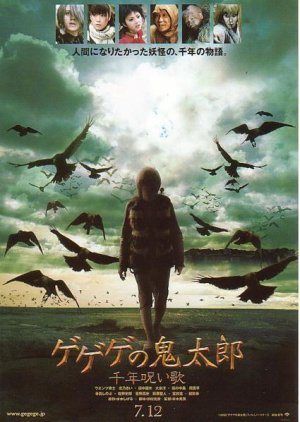 Young women disappear one after another in drizzling rain. They all hear the "cursed song" of the Cage Song before they vanish into thin air. Kitaro and his friends investigate these mysterious cases when they meet Kaede Hiramoto, a high school girl who finds herself involved in this mystery. With the help from the librarian of Yokai Library, they find out that the curse was caused by an evil Yokai that was released from 1,000 years of sealing. To save Kaede, they are to gather the 5 ancient musical instruments and perform the ritual to seal the evil Yokai again, which has to be done within 48 hours! In search for the ancient instruments, Kitaro and his buddies depart for three different points that the ancient map indicates Kitaro & Kaede head to "sky", the sacred mountain in Hakone, Cat-girl and Ratman head to "land", Mt. Takao, and Sand Witch and Old Cry Baby head to the "ocean" off the coast of Miura peninsula. Will Kitaro be able to stop the curse, protect Kaede and the human beings from the evil Yokai, and also, overcome his destiny? Edit Translation 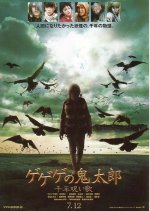 Completed
xKellyGirlx
3 people found this review helpful
Other reviews by this user
0
Oct 21, 2013
Completed 0
Overall 6.0
Story 7.0
Acting/Cast 7.0
Music 7.0
Rewatch Value 4.0
Searching for random movies for the weekend, I found this, and realized that I had once watched it before on a flight years back. Since I had just finished Gegege no Kitaro (the first movie), on I go on another movie marathon!

Well, for starters, I'm a HUGE, HUGE fan of those yokai/fantasy stories, so I had a vague idea on the concept of this series before I watched it. Along my journey in search for a satisfactory movie, I'd seen few of the best, but some the worst, of the genre.

Story-wise, Gegege no Kitaro:The Millennium Curse has an interesting plot line. There's no outrageous twists or gut-wretch-ish suspense that makes you choke on your drink, but with elements of the supernatural as the main focus, the story went along the flow quite well. It exploits the theme of co-existance between humans and yokai, to trust and believe in each other as the strength to defeat evil (nothing out of the blue, but no complaints).

As for the acting and cast, I'll say the actors and actresses did a really good job. They really did make the colorful non-human characters believable, real, besides being entertaining to watch. Eiji Wentz truly make Kitaro look good! And since it's a fantasy, expect some flashy costumes and heavy makeup!

For the music, it serves the scenes adequately. But it's not the kind of music I will specifically download and listen to.

Overall, this movie's not as engaging as those amazing ones, but it's still pleasant to watch if you have nothing to do and wanted something not-so-dramatic with a big teaspoon of fantasy thrown in. It could have been better, if the CG effects were improved. :)

New Topic
Be the first to create a discussion for Gegege no Kitaro: Kitaro and the Millennium Curse