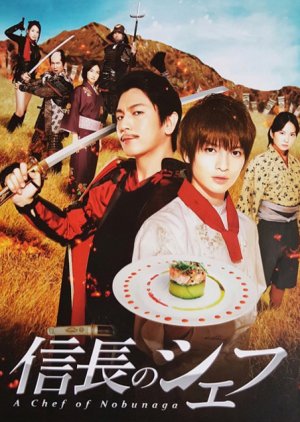 French chef Ken travels back in time to Sengoku period. Due to travelling through the timeslip, Ken has lost his memory, but still retains his knowledge on fine cuisine. Thanks to his excellence in cuisine, Ken eventually becomes the chef to powerful daimyo Nobunaga Oda. Edit Translation 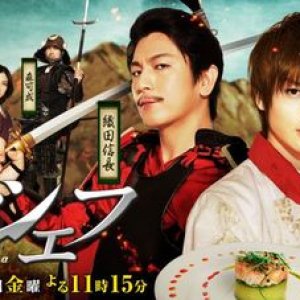 First thing you have to know: It's based on an ongoing Manga. Wich means: The story is still incomplete. You can sense that in the last few episodes of the drama.
There are still a lot of open questions. Some bother me more than others. After finishing watching it, I want more, so I can get my answers. A good sign actually.

Also: It might not be such a bad idea to google some characters, since there is not everything explained within the drama. I studied Japanese history at university, so I know most of these people. Trust me, it's a lot easier to follow, if you have at least a little bit of background knowledge. And it is more fun, to watch and think: "Oh, I KNOW this person." I love these moments.
And it will help you understand some things that are natural and common for Japanese, but seem difficult to grasp for everyone else.

Well, the story itself is not that great. Some modern day cook gets to be the chef of Oda Nobunaga cooking some modern dishes in the warring states period of Japan. Well, Japanese do love food. I get to notice that once again.
He has to cook his way out of troubles or right into them. It's cute and trust me, you do get hungry. The things Ken cooks look delicious.
Also there is no red string that ties all the episodes together. Ken never really asks himself why he forgot everything and why he ended up in the warring states period. Basically we are just following history's script with a cook in the middle.

There is also a little romance. I say: Little. Don't expect something breathtakingly romantic. It's just two people sticking together.
I don't really understand why they should "love" eachother. Still the drama hints to that.

As to the characters: I'm not sure. Some I totally loved, some I really hated and found utterly annoying.
Natsu for example. I think she was supposed to be kind of cute. Trying to dress up as a man so she can be a blacksmith. Just that, she is so annyoing that you are happy to not see her sometimes.

Well, Ken was great. He should be. I loved him. He is actually the main reason why I kept watching. Because I simply wanted to know what will happen to him.
And I just love to see him present the food. Haha...

On to the music:
I really like Yoshihiro Ike. I love his music a lot. But, at some points I felt it didn't fit the situation. Yoshihiro Ike makes cute music, lovely music. It somehow won't fit with Nobunaga on the battlefield. Though he again made some memorable pieces...

It's a cute drama. Don't expect too much of it though. It sometimes warms your heart. And it definitely makes you want to eat something delicious.
I'm hoping for a second season though. It just feels unfinished.

Completed
Luly
2 people found this review helpful
Other reviews by this user
0
Jun 14, 2015
9 of 9 episodes seen
Completed 0
Overall 7.5
Story 8.5
Acting/Cast 8.0
Music 9.0
Rewatch Value 7.0
First of all, let me start by saying that I didn't read the manga and I have very limited knowledge of the historical period in which this drama takes place. That being said, I really enjoyed it.

The idea is pretty interesting and original, not the fact that a person in the Heisei period is transported to the Sengoku period, but the fact that it's a Chef and his creations are going to be pivotal in Nobunaga's campaign through the country. To think that some of the most important choices and relations in history have their outcome infuenced by food is an idea that I can't help but loving. If you think it's too bizarre for you, you've been warned.

As someone who knows very little of Japanese history, this drama was easier to follow for me than Nobunaga Concerto was, because of the narrator's and Ken's (Tama's character) explanations. To people who already know all this, it may be a bit outputting but I appreciated it.

I can't help but comparing it to Nobunaga Concerto in some things because I saw them both back to back and they have similar ideas. Character wise, I found that this one was a little less attractive. The performances weren't all as convincing as I would have wanted, but they're not terrible. Storytelling wise, there are plenty of things still unclear, but since there's another season, I'm giving it a pass for now.

All in all, it's a very entretaining drama, with a nice twist on history without losing its accuracy and that isn't difficult to follow. As a side note, I recommend not watching this if you're hungry, because you're gonna end up craving food almost for sure.