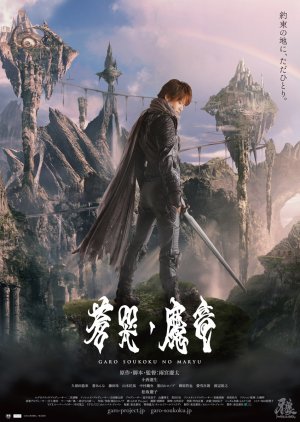 In order to protect humankind, Kouga Saezima makes a contract with powerful Kazari. Kouga Saezima travels to the land of promise to bring back the Nageki no Kiba (Fang of Sorrow). When he gets there, Kouga Saezim loses the Garo sword, magic clothes and the Mado ring, which he always carry when he fights. Then, Kouga Saezima in a dense forest saves a blue-skinned girl called Meru. She calls herself the "thing". Edit Translation

Completed
Alice
3 people found this review helpful
Other reviews by this user
0
May 5, 2014
Completed 0
Overall 9.5
Story 9.0
Acting/Cast 9.5
Music 9.0
Rewatch Value 9.0
I really loved this movie. The graphics, the acting, the costumes: everything was really on par. You could tell they put a lot of effort into this movie.

The graphics made it seem like a live cartoon movie with all the characters. The amount of detail made me feel like I was actually in the world of the movie. It was truly amazing that everything was only filmed on green screen and added in post-production.

But the actors in this movie made it come alive. Konishi Ryosei will always be Garo/Saijima Kouga to me for every Garo series I watch . Even if this movie focused more on the world-building, he made it seem like he was actually part of this alternate universe.

The costumes was great. All of the characters looked like they were actually from an alternate universe due to the fine amount of detail in their appearances, from clothes to makeup.

I really love the amount and detail and effort placed into the Garo series. I am not ashamed to say I'm a tokusatsu fan. Garo is one of those series that everything they make always connect to the original Garo, especially the appearance of the original characters. Which makes the story understandable.