After introducing Thai lakorns(dramas), it’s time to get down to business and start recommending them for those interested in trying some. Although Lakorns like most Asian dramas can be cute and fluffy, there is also another type that deal with more serious topics like people’s lives, dreams, struggles, and relationships. These slap/kiss dramas are often centered on revenge, murder, mystery and suspense. My recommendations will feature those types of lakorns; they usually contain rape or attempt of rape scenes so beware.

Synopsis: This drama centers on Tos, a grape plantation owner, who will do everything to keep his younger sister, Vithinee, happy. So when Nee falls for Pong and gets pregnant with his baby, Tos decides that to prevent Bow, Pong’s girlfriend, ruining his sister’s happiness he will make her his wife. This happens when Tos coincidentally witnesses a man drugging a drunken Bow with the intention of raping her. This leads to her misunderstanding and thinking Tos has raped her. He then uses this to his advantage and blackmails her into marriage, but he has secretly fallen in love with Bow and teases her as a husband to a wife.

However, they constantly misunderstand one another due to Pong’s attempts to get back with Bow and the attempts of Baitong, the girl that has an unrequited love for Tos, to ruin Bow and Tos’ marriage completely.

Why is it interesting? It’s a good series for people who love dramatic relationships and angst in general. The acting of both Weir Sukollawat Kanarot and Pinky Sawika Chaiyadech was quite good especially their amazing chemistry. It’s great to see how the barriers of past prejudices and misunderstandings are broken down by love. It is a thoroughly enjoyable series with a mixture of light-hearted humor and angst/jealousy.

Do you need more convincing? Here's an MV (it contains some spoilers, so beware) to whet your appetite. All credits to the owner: Synopsis: Harit Rangsiman (Aum Athichart Chumnanon), a pearl farm owner, decides to get revenge on a woman named Sansanee who was his younger brother Harin’s girlfriend. She had broken up with Harin, which ultimately led to his committing suicide.

Harit decided to kidnap Sansanee and to take vengeance on her, but he accidentally kidnaps the wrong woman – the woman he kidnaps is actually Soraya (Aff Taksaorn Paksukcharoen), Sansanee's cousin. Despite Soraya’s numerous attempts to explain, Harit continues to believe that Soraya is Sansanee and so Soraya ends up accepting the punishment meant for Sansanee since the latter saved Soraya from drowning when they were younger and so she wants to use this as an opportunity to repay her debt of gratitude.

Why is it interesting? Although it's not light-hearted, I found this drama interesting. I thought the storyline sounded really typical at first, but I soon figured that this lakorn took on a distinct and unique level of tension. Aum’s acting really had me convinced of his status as a vengeful brother and I could really feel Soraya’s pain due to Aff’s excellent acting. Although the story could have been shorter, Jam Loey Rak was overall a good and mature revenge series.

Do you need more convincing? Here's another MV (also containing spoilers), and all the credits belong to the owner: 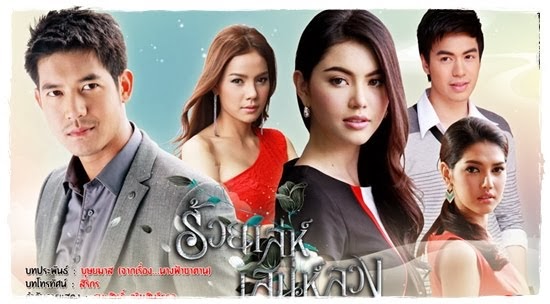 Synopsis: This is another revenge lakorn centered on the loss of a loved one. Krao Supagan (Weir Sukollawat Kanarot) decides to take revenge on the children of the Vichawayt family. As a child, he witnessed his mother’s suicide after being raped by Mr. Vichawayt, who stole their shares in the company that the two families had set up together. Krao then also lost his father to grief and was raised with only revenge in mind.

After Mr. Vichaway’s death, he leaves his fortune to his three children: the eldest son Asit (Chane Nattawat Plengsiriwa), the second daughter Orn (Tuinuey Pasaraporn Chetiyanuwat) and Nuch (Mai Davika Hoorne). Krao then decides to set about seducing Orn and Asit’s wife, Lita, (Yok Thanyanka Thanakitananon). It is only Nuch that sees through his plans and makes a deal with him that she will marry him if only he will stop messing with her family.

Why is it interesting? This is a well-written and interesting story with aspects of both humor and heartache that made this series one of my favorite lakorns. I must confess that it was my undeniable girl-crush on Mai Davika that first drew me to this series, which was then escalated further by my love for Weir’s lakorns. But by the end of the series I found myself loving the story and even the supporting actors for making the plot enjoyable. The story did sometimes lead to an emotional rollercoaster, which might not be attractive to all, but I love me some melodrama.

Do you need more convincing? The third MV for you with some spoilers and all the credits belong to the owner:

Well, those were my 3 recommendations for slap/kiss Thai lakorns. Although these series aren’t perfect, they are each enjoyable in their own way. They are sometimes funny, sometimes romantic, but most of the time downright heartbreaking and you will cry buckets.

Missed Thai lakorns introduction’s article? You can read it here.

If you watched good Thai dramas and/or films and you want to write a recommendations’ article to share the love. Please message Cheer about it.