Hello, this is your most beloved writer Park Chohwa (don’t shoot me). Music is one topic I always wanted to discuss. I’m not an expert in the field, AT ALL, but it’s one of my passions so I decided to look into music in Korean dramas and films. But it’s a huge topic so I narrowed it down to categories. After all the narrowing, I ended up with 8 categories: classical music (including opera and choir), pop music (especially idol groups), rock bands, musicals, singers, hip hop, traditional music and classical dances. The articles of this music series won’t be able to cover everything since Koreans live with music. I’ll try to discuss some of the works in each category. The first part of this series is on classical music.

No matter what our favourite music genre is, we all have that classical phase. Whether it was a time of our life when we went crazy over classical music and spent hours listening to symphonies and operas or a brief time when our mood required it, we’ve all been there. Even if we were clueless as to what the piece played was or who the composer was, we had at least one song we like, one composer or one musician. Even if we don’t know how to play instruments, we all have that one instrument we like listening to the most. We all have that moment where our eyes shut unconsciously when a certain piece plays. That is the beauty of classical.

Music in K dramas and films –after the research- focuses on music as healing mostly. Music is portrayed as the refuge that heals and comforts. Music offers people the hope needed to start anew and break away from the shackles of the past. Music brings people together and evokes love. In this masterpiece, music is used as healing. Women inmates have it hard in prison. Each one has her own sad story. Each one has had a reason to commit a crime. But a crime is a crime. Nobody cares for the behind story. The miserable women are locked up. Here comes music to help them find hope in whatever remained in their lives. They start a choir. They live for it. They change to the better. Those who gave up on life decide to give it a new try. Those who closed their hearts off, let others in. Those who blamed themselves start seeking forgiveness. The women who ended up in prison because of domestic and sexual abuse, cheating or debts find in music the will to carry on, the lost joy and the forgotten smile.

The music played and the songs sung in the film are so deep and meaningful. They carry a great sum of emotions. They convey the message. And they break the heart. 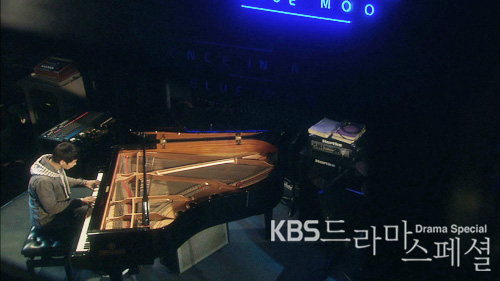 This one-hour drama special has nothing to watch except for the music (which is obviously not played by the main actor). The story is lame and the acting is nothing to boast of. There’s piano, a lot of it. Beautiful playing. Calming background music to fit the theme and the pace of the story. Chopin brought two people together. Love was kindled by the piano. Music here represented Cupid.

Now this was touching. Three people carry a great amount of pain and loneliness. They’re abandoned by the whole world. The violin brings them together. Music builds friendship, heals the wounds and eases loneliness. Jang Na Ra was awesome and her violin playing (well, I can’t say professionally) was so moving.

P.S. Violin is that instrument that makes me close my eyes involuntarily. Piano might be the instrument that cures and gives hope, the dream of many and the joy of others. But piano can be a dangerous weapon if used for the wrong purpose. In this melodrama, piano is used for revenge. It’s no longer the origin of beautiful sounds but the knife pointed at family members. Piano resembles power and money. Making piano is to serve selfish desires. Playing piano is to defeat enemies. Composing piano pieces is to prove you’re the best. Piano is used to fulfill the greed of some and to avenge others. Despite the darkness of the story, we are presented with some outstanding performances by Ji Chang Wook and Joo Ji Hoon. So many superb performances, heart throbbing background music and out-of-earth acting. The drama is not for everyone though.

Because music doesn’t discriminate, even a gangster can turn into a prodigy opera singer. Because music is like fate, it brings those at odds together and gives them one unforgettable relationship. Because it’s music, people can start their lives anew.

Though I don’t know who sang for Lee Je Hoon, he surely gave me goose bumps and left me gaping at the screen like a complete nut. Jang Ho’s voice and the songs he sang went straight to my heart. The music was brilliant. The duet by Lee Je Hoon and Han Seok Kyu brought me to tears. And the last opera performance was a highlight of Heaven.

The thing about this drama was definitely not the love story though it was the main story. What made this drama worth it were the music performances of each character. Music here represented the dreams of youth. The young people in the drama lived by and for classical music. Though selfishness and greed stood in the way of some and though in moments they forgot the spirit of music, music grabs a hold of them and brings them back. Classical meant the present and the future, friendship, love and family, joy and happiness and the bond between the sound and the soul. When the world turned its back to them, music didn’t.

This drama is about a love story. It’s evolved around the love story and centres on it. But what gave that love story the depth, the beauty, the complication and the mystery was the piano. The piano scenes of the two started the story and developed it. The piano was the language that broke all the barriers between the two: age, social standards, rules, financial difficulties and even the future. The exotic effect of the piano on the two changed their lives once and for all.

Out of all music-themed dramas, it was this one that left me paralysed for days. Yes, the story and the acting were extraordinary. But it was the music after all. How music changes people, makes them closer, gives them hope, brings out their humanity and enlivens their dreams. I’m always in awe of people whose dreams are music related. It’s such a mysterious call I can never understand. It requires taste, soul and tenacity. It requires perseverance and a strong heart. Watching a bunch of different people hanging on to their dreams and music no matter what still baffles me. And the sounds those dreams make!

In Beethoven’s Virus, music was salvation: a way to escape the hell we live in. 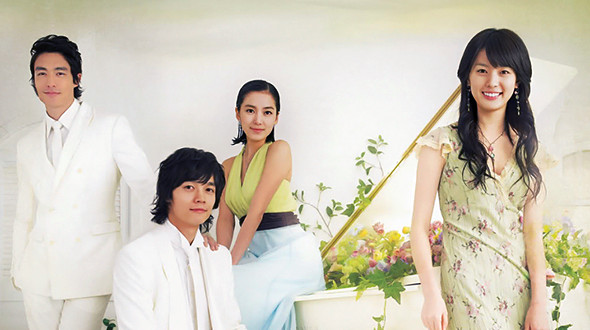 There were beautiful piano performances in this one, and a beautiful love story. The end.

It was one of my very first dramas so I do not recall much about it. But I do recall Seo Do Young playing the piano in a huge green field!

The BEAUTIFUL cello was used in this film as a weapon of horror and revenge. Two friends and rivals play the cello. A tragic story develops. Cello symbolises hatred, terror and revenge. Not the best way to portray classical. –suddenly scenes from different dramas and film where the villains sip at wine and listen to classical pop up in front of my eyes. Whose concept was that to begin with?!- Through the piano, a neglected and scarred child finds talent, dreams and love. Uhm Jung Hwa has lost the joy of playing the piano with time and harsh circumstances. One young boy invades her life and brings back all the beautiful recollections a piano can carry and starts a new life for both.

The child actor played some wonderful music. Uhm Jung Hwa was no joke either.

Here we summarise our classical part. Waiting for your favourite classical music works.