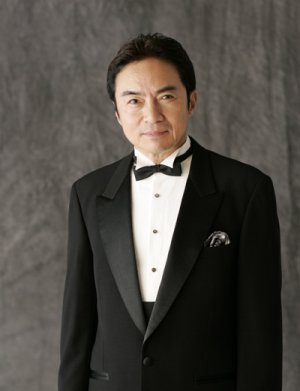 Teruhiko Saigo is a Japanese singer and actor. As a singer, he is known as one of the three "Gosanke", referring to gosanke, the three great Tokugawa houses.
Saigo made his debut in 1964 with the song "Kimi Dake o", for which he won a Japan Record Award for best new artist.
As an actor, he has portrayed people as varied as 20th century Prime Minister Kakuei Tanaka (in the 1983 film Shosetsu Yoshida Gakko) and 16th century samurai Katakura Kagetsuna (in the 1987 NHK Taiga drama Dokuganryu Masamune). A native of Kagoshima, he has played the roles of native sons such as Kuroda Kiyotaka and Saigo Tsugumichi, but his characters also include Tokugawa Ieyasu, Yagyu Jubei and Hattori Hanzo. His roles in Chushingura tales have included Mori Koheita (1985).
Saigo has starred in various prime-time television series. These include Edo o Kiru, Genkuro Tabi Nikki Aoi no Abarenbo, Abare Hasshu Goyo Tabi, and Abare Isha Ranzan. NHK has tapped him for various Taiga drama roles as well. Among them are Mori Hiromoto (in Mori Motonari, 1997), Sanada Yukimura (Aoi Tokugawa Sandai, 2000), and Honda Masanobu (NHK's Taiga drama Musashi, 2003) in addition to Katakura Kagetsuna. Other NHK roles have included the contemporary daytime drama Niji no Sekkei (1964) and the uncle of the title character in the asadora Wakaba (2004–05).
(Source: Wikipedia)