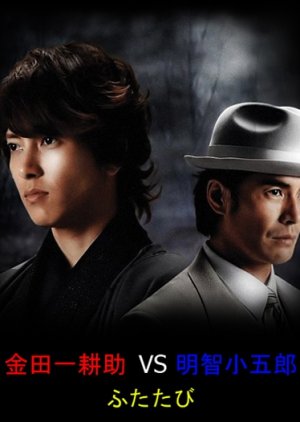 Ryujo Hoshiko comes to detective Kindaichi Kosuke’s office with a request. She would like him to investigate an attempt to poison her father, Baron Ryujo Kiyohisa. Hoshiko says this may have something to do with the issues of succession such as the peerage and fortune. Accepting the request, Kindaichi and Hoshiko are driven by a servant of the Ryujo family to the mansion in Nagano Prefecture. On the way, the car comes to an abrupt halt on a country road. They have stumbled across the dead body of Kazuma, the husband of eldest daughter Ryujo Hanayo. After assisting with the investigation, Kindaichi and Hoshiko finally reach the mansion. The police detective Hibino is questioning a grieving Hanayo, her mother Shimako, second daughter Yukiya and her husband Hoshino Natsuhiko. Then another man arrives. It is Akechi Kogoro. He received a warning from the 20-Face Phantom who is targeting the golden statute of a Buddhist deity which is in the Ryujo’s possession. Kindaichi and Akechi end up face to face again. Kindaichi is conscious of it, but Akechi acts relaxed. From the next day, Kindaichi searches for clues in the murder. On the other hand, Akechi pursues the whereabouts of the Phantom. Kazuma, who had been the possible successor of the peerage, had no reason to commit suicide. Everyone in the family believe he was murdered. In a search after that, it is discovered from a storehouse within the mansion that Kazuma vomited blood. There is a high chance it is the same poison administered to the baron. Meanwhile, Shimako has been hastening a proposal of marriage for her third daughter Hoshiko. The other party is Takuzo of Hishikawa Construction. Hoshiko makes an agonising decision in order to protect her family. And then, another incident occurs in the Ryujo family. Edit Translation 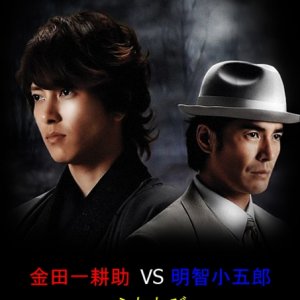 New Topic
Be the first to create a discussion for Kindaichi Kosuke vs. Akechi Kogoro Futatabi