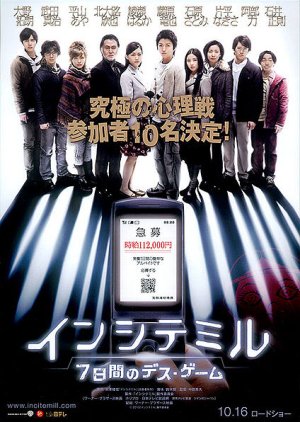 Ten people gather together at a complex named "Ankikan" after hearing of a short term job paying 112,000 Yen ($1,236 USD) per hour. The ten people are informed that they will be monitored 24 hours a day for 7 days straight in a psychological experiment. They are then sent to individual rooms with a different weapon located in each room. Once they are locked in they learn the rules of the psychological experiment. 1.) Each person must return to their room by 10 PM. 2.) At the end of 7 days or when there are only two surviving members left alive the experiment will end. The next day a person is found shot to death. Now, what looked like a dream job will turn into a nightmare. Edit Translation 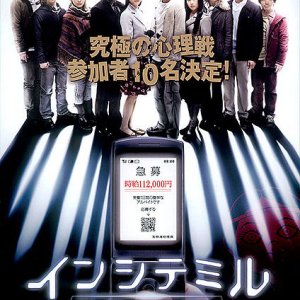 Completed
claudya87
8 people found this review helpful
Other reviews by this user
0
May 9, 2011
Completed 0
Overall 8.0
Story 8.0
Acting/Cast 9.0
Music 7.0
Rewatch Value 7.0
This movie is a lesson of life. What would you be capable to do to survive? What choices would you make? The story is well constructed, the characters seem plausible and the psychological part developed gradually to captivate the audience. You become the detective. And then boom! The surprise element appears.
Was this review helpful to you?

Completed
sambart
2 people found this review helpful
Other reviews by this user
0
Dec 9, 2012
Completed 0
Overall 9.0
Story 8.0
Acting/Cast 9.0
Music 9.0
Rewatch Value 10
The film starts fairly enigmatic: who are these people, why are they there? And then slowly (over the first 20minutes or so) everything is explained and rules are in place. THIS is where it gets REAL interesting! Death, mysteries, twists, turns, torture, fighting, slightly romance, everything happens! Extremely intense! Especially when they go on patrolling while the GUARD is out as there is a risk of being killed and a romantic scene is thrown in and then nearly getting caught. These twists and turns happen all the way up to even the last MINUTE of the film!
I was actually hoping there'd be an intense romantic/sex scene between Yuki and Suwana.
I really did not like that GUARD; pretended to be fair but FUDGED them over o_O xD All the characters are individual and different but are able to relate somehow.
The last 10 minutes of the film is where it really picks up tension and speed but nevertheless, the rest is definitely a "gripping the sheets" and "on the edge of your seat" feelings. Sometimes jumping out of your skin too (I know I did!)
A small (film study) comment on cinematography (camera shots) very nice shots and I loved the angles on the close ups and the colouring in this film was great and the use of music and sound was extremely effective (especially the patrolling part!) so yeah overall EXTREMELY enjoyable, definately watch again and again and VERY tense! =D
Overall: AMAZING!
And after rewatching this for a second time last night, I stand by my original review but add one thing... Why didn't he give the money to the child?!