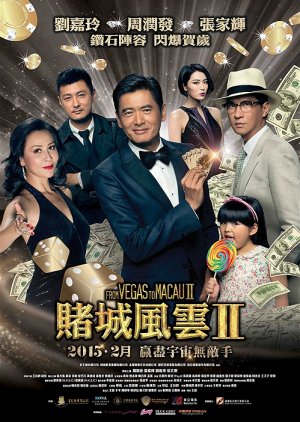 Completed
Senpai
1 people found this review helpful
Other reviews by this user
0
Jun 17, 2017
Completed 0
Overall 1.0
Story 2.5
Acting/Cast 2.5
Music 4.0
Rewatch Value 1.0
007 that's nothing, it's Macau!
I thought this should be a movie about gambling? I must say that this movie is a piece of total junk and that no one should waste their time on this movie.
It's shameful, the whole movie is soulless, tasteless and obnoxious. I almost felt insulted after seeing him. The producer and staff did not respect their audience. The plot was empty and careless, the camera work was like an 80-year-old TV show, the acting was amateurish. One of the actors simply did not have facial expressions throughout the film. I entered with few expectations but was still amazed at how bad it was. They could not even do simple shots made in preformed CGI right. The few action scenes have been seriously shot and seem completely unreal. The hidden ads are no longer hidden, they are dumped directly into your face blatantly without any disguise. The movie producer did not really care about making a cheap film to raise any amount of money they could get.
In general, "From Vegas to Macau II" is trash, plot is messy that makes no sense. I know this was supposed to be a comedy movie, but the jokes are not funny at all, and the pointless argument makes the jokes even more unpleasant to hear. Terrible dialogues, writing and acting totally destroyed the performance of this film. CGI made me cry so horrible that she is.