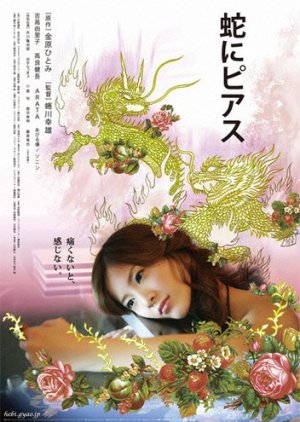 Lui is nineteen years old, beautiful, bored and unmotivated. When she meets Ama in a bar, she finds herself mesmerized by his forked tongue and moves in with him and has her own tongue pierced. Determined to push her boundaries further, she asks Amas friend Shiba to design an exquisite tattoo for her back. But what Shiba demands as payment for the tattoo leads Lui into a brutal and explicit love triangle like no other. Then, after a violent encounter on the backstreets of Tokyo, Ama vanishes and Lui must face up to the reality of her life. Snakes and Earrings (Hebi ni piasu) is a based on the novel of the same name by then 21 year old writer Hitomi Kanehara. The novel went on to win the prestigious Akutagawa Prize and sold a million copies. Source: AsianMediaWiki Edit Translation 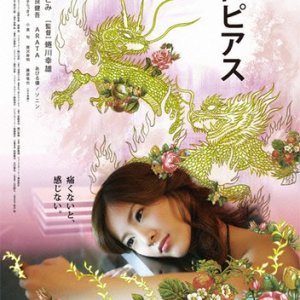 Completed
Elena
9 people found this review helpful
Other reviews by this user
0
Jan 4, 2016
Completed 0
Overall 9.0
Story 7.0
Acting/Cast 9.0
Music 10
Rewatch Value 10
It's 5 am. I'm tired.
I like the music. It was used in the right moments. That's good.
Also, I liked their appearance. Not what you would see in regular movies.
Acting was good.
At frist I was creeped out, but later I got used to it.
The story itself isn't that much, but it will definitely keep you amused. You'll want to know what happens in the end.
In the beginning i had no idea this movie is going to be about what it is, so ....well nothing, I just watched it.
And the end was a bit confusing.
I didn't dislike anything particulary. Maybe the main redhead's personality, I felt sorry for him throughout the whole movie. And the other guy will give you creeps. I'm not sure what to think about him.
I will definitely rewatch this movie, so if you're a fan of weird stuff you'll like it too.
*update (i watched it again) :
- there's like 6 characters
- their backstory doesn't exist( in the movie; )

Completed
Senpai
3 people found this review helpful
Other reviews by this user
0
May 11, 2017
Completed 0
Overall 7.0
Story 7.5
Acting/Cast 8.5
Music 7.0
Rewatch Value 7.0
First, the film has some flaws but it's faithful, read the book, it's true to the book, yet the book makes things more interesting, the perspective of the book is always superior.
To see all this borders masochism more than the desires of the protagonist. I loved seeing Shun Oguri and Tatsuya Fujiwara as gangsters ... a plus.
Yuriko Yoshitaka's acting is convincing but not perfect and Arata is unrecognizable in this film.
Yes, it's an adult movie, it requires up to a certain description to watch. I confess not to be a fan of tattoos and extravagant piercings among other things that the film shows, as I had read the book, I could not stop checking his film.
I like the music. It was used at the right times. That's nice. It gave life to the film. Positive point.
Also, I liked its aesthetic appearance, not what you would see in ordinary movies. Performance was also good, cast is to be congratulated.