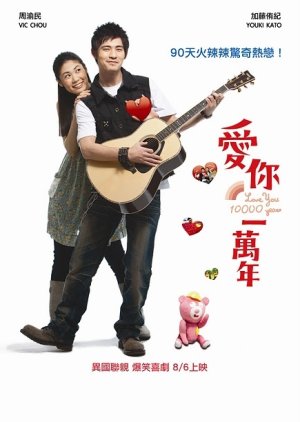 Wu Qi Feng (Vic Chou) is a lead singer in a local rock band called "Monkey Electric Boy Band" and based in Taichung. Joining him in the band are Da Dou (Huang Deng Hui), Xiao Ji (Li Bo En) and Ah Yan (Chen Shan). Previously Wu has been unlucky in his love life, and has never dated any girl longer than three months. Sakurada (Kato Youki) is a Japanese girl who is on a three month visit to Taiwan after breaking up with her boyfriend to study Chinese at a language center. One day she has a brief affair with Wu and later he requests her to sign a contract to be his girlfriend for 90 days and she agrees. One of the condition of the contract is they must get separated after 90 days. However, after getting know each other quite well, both find that the relationship seems to be true love and both are unwilling to break the contract agreement as the dateline approaches. What is the outcome of their love story in the end? Edit Translation 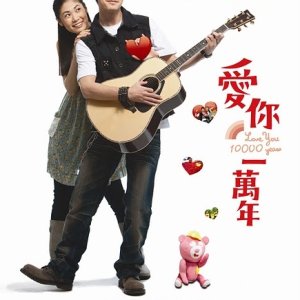 Completed
Rourou
12 people found this review helpful
Other reviews by this user
0
May 6, 2012
Completed 0
Overall 6.0
Story 6.0
Acting/Cast 8.0
Music 9.0
Rewatch Value 4.0
1-The reason I watched this : It was in my PTW list forever then I had a recommendation from a freind so I decided to give it a go.

2-Storyline/Plot : It was normal rom-com but it seemed a little interesting when the lead characters came from different countries because it was fun hearing the Japanese language here.
The story wasn't boring but it wasn't that attractive; they've done a great job with the music since it was the stength point of this film. In general, I wouldn't say that the story was special or entertaining, it was acceptable overall.

3-Acting/Cast : In here, you get to see a different side of Zhou Vic, he was smiling a lot that I got confused sometimes since he seemed a lot unusual from what I remember but that proves his skills in portraying the character in a great way.
I'm not familiar with the lead actress plus I have nothing to say about her but I will point that she had an acceptable chemistry with Zhou Vic. One more thing to pint out, the band members wwere so cool.

4-The ending : Even though it was a typical romantic comedy's ending but I really liked the whole dancing concept at the end.

5-My impression: I watched this when I had nothing better to do so it was fair enough. I didn't actually enjoyed the film plus there weren't many special events to follow but that doesn't deny that I liked the music and smiled when the film ended so no regrets .

6-Overall : If you like romantic comedies then this is for you.
If you like to hear good Chinese music then watch this.
If you need a film to pass time with then you would like this.

Just hate this movie. It's such a drag and totally pointless and stupid and ridiculous and I can't believe Vic Chou actually did this movie because he's totally awesome in MARS and pretty decent in meteor garden too. And there are other dramas which he's done which are totally awesome although I haven't watched them yet. This movie, in my opinion, is a total waste of time. The only good thing that came out of this is it's music. I don't know, I might be sounding a bit harsh but this movie simply provokes me for some reason. Makes me cringe with anger in the middle of the night. Ok, the last part was an exaggeration. bleh.