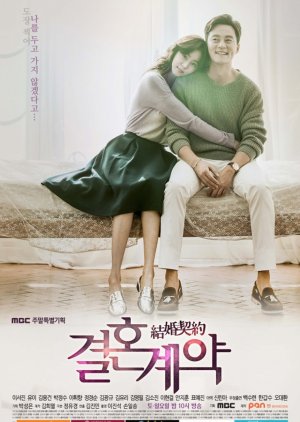 8.1 Scent of a Woman (2011)
Both dramas have similar story. In both dramas woman is dying and man wants to spend the rest of the days with her make every day count.
1 Recommended by Nishan
Read recommendations by 2 more users

8.5 Chocolate (2019)
Both give a familiar vibe - to with a wealthy son and someone who works for a living. Highly recommend watching both shows
1 Recommended by Jav
Read recommendations by 1 more user

In both dramas, the hero is much older than the younger female main lead.
1 Recommended by jazzy36

8.1 Ho Goo's Love (2015)
Ho Goo's Love similarly follows Uee as a young, single mother, except in that drama she was a national swimmer before becoming pregnant and running away on her own. It is definitely a lighter drama with more comedy, but still delves into deeper issues in society that reminded me of the way Marriage Contract went into the issue of single motherhood and illness. Basically, watch Uee's amazing crying and acting in this drama too!
1 Recommended by isabelle

7.3 Can Love Become Money (2012)
Both involve a poor woman which needs money and have ulterior motives aproaching a rich and very suspicious man. Both signs contacts for their involvements to one another.
0 Recommended by Loving_Roots

8.0 Should We Kiss First? (2018)
Both shows are about falling in love, with an older man as the protagonist and a female lead who makes him a better person. Both are mature love stories that deal with terminal illness.
0 Recommended by ClassyApples

7.7 The Spring Day of My Life (2014)
In both dramas there is a younger woman-older man relationship. The woman has some kind of sickness.
1 Recommended by Clgs

7.8 Well Intended Love (2019)
the two is about contract marriage of a CEO or president and a poor woman who desperatly needs money
3 Recommended by guy-noel cupit

8.3 Fated to Love You (2014)
Marriage Contract and Fated to Love You were similar to me and I think that the ending will most likely be similar as well due to the mens feelings.
-Both women are kinda a push-over in a way.
-Due to "conditions" both women must marry a rich man.
-Both couples make a "contract" for their marriage.
0 Recommended by BlxxdyButterfly

8.3 Remembering Lichuan (2016)
The concept is similar where one the main leads has cancer.
The male lead (LiChuan) has cancer and he leaves the female lead (XiaoQi) thinking its the best thing for the her.
0 Recommended by Jav

7.3 Hapimari: Happy Marriage!? (2016)
Same plot about contract marriage. The difference is that the female lead in MC has a child when getting married whereas Hapimari is marriage between two single.
0 Recommended by YunYee

8.5 Full House (2014)
There are both a marriage contract,Also live together..
But a full house comedy more and there is no disease
0 Recommended by NWCDH

7.4 Sunny Happiness (2011)
both male lead are owner of hotel/restaurant and female lead used to work their as an employee for some reason they get in pretended relationship, both drama have child involvement also
0 Recommended by DrAmAlOvEr