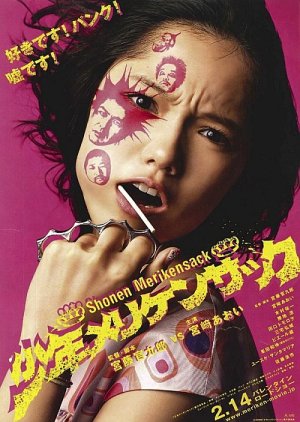 A step away from losing her job, record company employee Kanna comes across an awesome punk rock band called Shonen Merikensack on the Internet, and sets out to sign them. With her job on the line, she discovers too late that the video she saw is actually an old clip from the 80s, and the members - bassist Akio, guitarist Haruo, drummer Young, and vocalist Jimmy - are now all down-on-luck middle-aged fogies. As buzz for the mystery band grows, Kanna's record company, still in the dark about the truth, decide to launch a concert tour for Shonen Merikensack, and they want Kanna to be the band's manager! Edit Translation 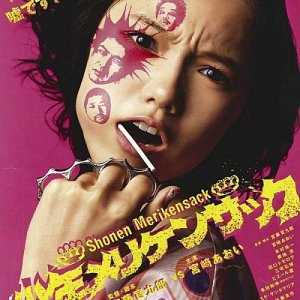 Completed
biniBningPunkista
1 people found this review helpful
Other reviews by this user
0
Jun 9, 2012
Completed 0
Overall 7.0
Story 6.0
Acting/Cast 9.0
Music 6.0
Rewatch Value 5.0
Crazy, noisy, garbled music… Pure PUNK ROCK middle age. It was a funny movie nonetheless. Aoi Miyazaki's acting was over the top and it was my first time to see her like that. I have always imagined her as a melodramatic person even in other movies.

The movie moved back and forth from the bands past, namely the Bras Knuckle Kids. It showed how the band members evolved to the kind of person they are today. Watching this film made me think what punk really is about. Like in Sex Pistols' era along with their bassist Sid Vicious who are known as the Punk rock gods during the 80's, I feel that their music are cleaner and more turbulent than what we have of punk today. Today's punk is more on what most people call emo side. Songs made out of love and heartbreak instead of about controversies, internal affairs and other issues of real life.

Back to the movie… it also had its broken plots and what nots in between when Kana's character goes out of hand but the ending surely got me smiling then staring blankly after. Music wise… as I have already mentioned above it was terribly noisy. Horrible if they include the shouting, I am not a fan of too much violence. So for a supposedly music endowed comedy movie with lots of sub plots, this almost made me stop watching. Still, it was an OKAY film at the end.