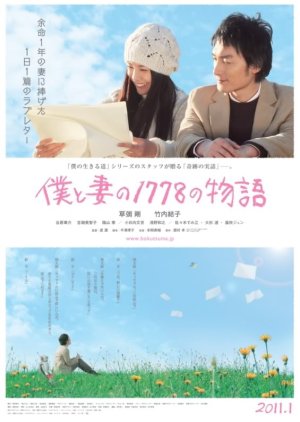 Sci-fi writer Sakutaro (Kusanagi Tsuyoshi) and bank employee Setsuko (Takeuchi Yuko) met at as high school freshmen during their summer vacation. Since that time, the couple has always been together and eventually married. One day, Setsuko complains of a stomach ache and is hospitalized. Sakutaro then learns that his wife has colon cancer. Sakutaro takes the advice from his doctor that laughter helps the immune system and proceeds to write a short story for his wife every day. At first, Setsuko was expected to live for only 1 more year, but she lived for 5 more years and Sakutaro eventually wrote 1,778 short stories for his wife. Edit Translation 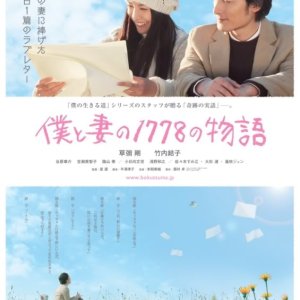 Story: At first this sounds like a very sad story, like 1 Litre of Tears. I put off watching it because of that impression. The movie is generally more upbeat then the synopsis lets on. You get to see inside a science fiction writers mind and truly understand just what they’re thinking. Some of the stories that he had come up with were so ridiculous that you have to laugh. You’ve either got to very imaginative or clinically insane to come up with the ideas that he did. But it wasn’t just about the funny short stories. The relationship between Sakutaro and Setsuko is cute and it is really enjoyable to watch this movie.

The only problem I face is, to me, this is the kind of movie where once you watch it you don’t really want to watch it again because you know what’s going to happen and it isn’t funny anymore. I shouldn’t say ‘funny’ because Setsuko is sick, but once you watch it you’ll understand. It was very enjoyable to watch.

Music: I didn’t pay much attention to the soundtrack. I was too busy laughing and crying.

Cast/Acting: Tsuyoshi Kusanagi and Yuko Takeuchi did a good job. In the movie the two of them have a thing for robots and I really liked how Tsuyoshi Kusanagi kind of seemed like a robot himself. Not in a he-can’t-act-he-is-emotionless kind of way. It’s kind of like how he was so intent with writing and keeping his wife by his side. He was so focused and sincere.

Completed
JustOneMoreEpisode
1 people found this review helpful
Other reviews by this user
0
Oct 25, 2019
Completed 0
Overall 7.0
Story 7.0
Acting/Cast 7.5
Music 8.5
Rewatch Value 6.0
As far as I remember I have never watched anything played by Kusanagi Tsuyoshi, and as a first film it wasn't disappointing at all.

The film is based on a true story following the life of Mayumura Taku, an SF writer, who wrote a short story everyday throughout the course of his wife's sickness.

A very well made film that almost got me crying. Many parts in it will just keep you mesmerised. Turning the writer's imagination into scenes in the film was successful despite the use of computer graphics which can sometimes destroy a film.

I must say that I was mostly satisfied watching the close ups as the writer wrote on paper. It's a plain thing but it's one of my favourite things that was used.

New Topic
Be the first to create a discussion for 1,778 Stories of Me and My Wife