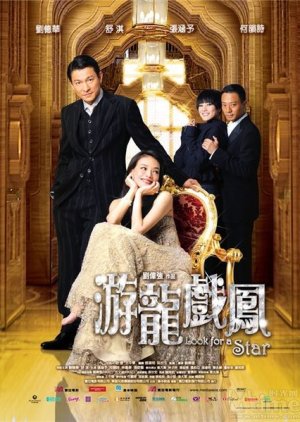 Look For A Star mainly focuses on the unlikely romance between Sam Ching and Milan Sit. Sam Ching is a happy and carefree billionaire with no luck in the love department. Having been divorced three times already, Sam is still trying to find the right woman for him. One day Sam comes across Milan Sit, a part- time croupier who works for him and a full -time cabaret dancer. Milan does not have much, but she is feisty, passionate, and outspoken. She is not born with much but she knows true love. When they fall in love despite their different lives, those differences start to bring a wedge between the lovers. Meanwhile, Andy's chauffeur, Tim Ma and personal assistance, Jo Kwok, are having their own troubles with love. Tim is pursuing a single mother and Jo is falling for a part time worker. Look For A Star is inspired by the real-life relationship between Stanley Ho and his fourth wife, Angela Leong. (Source: MyDramaList) Edit Translation 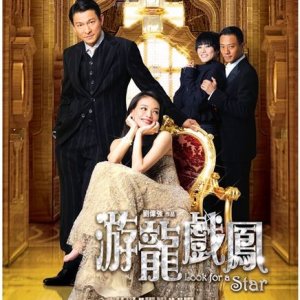 The story isn't that special, the main story is common about a rich man falling for a poor girl; the kind of story that we're all used to. Even the other two stories weren't that unique, actually one of those two ressembled the main story except there was a switch.

*In the positive points column, I have to mention that the existence of three different love stories was nice, I would've been really annoyed and bored if it was only the main story.

--->Romance: To start with, I didn't like the main love story because it was so cheesy therefore let's not talk about it.
The other two love stories were accepted, I don't know why I focused on them more than the main one; I think they were more attractive plus the script of those two was nicely written unlike the other one. Just because the film didn't focus on them like the main story made them more interesting to the point that I prefered them.

*I can't think about any other positive points but let's mention that the story's development was good sometimes, only "sometimes".

--->Romance: The main romantic story that should've been the most attractive failed to do so, it wasn't boring but the other two were better. Even event's progress wasn't that great; at the beginning, things seemed appeling then everything just faded away.

*Another negative point: The film's story was full of cliche plus many elements felt missing.

I only saw him in Wuxia films before so it was hard to watch him in a romantic production but I still have no copalains about his acting skills.
The character is a usual character for me, nothing special about it. In the main love story, I liked him better than the lead female and this have nothing to do with gendres, it's just that his character was better expressed.

*Shu Qi:
I am not familiar with her acting skills. I can't judge an actor/actress after one film especially if it's a a non deep romantic film.
The character was really good at the beginning, there were good vibes but as the story progressed, Milan became so shallow and I hate shallow characters especially if they doesn't justify their shallow behavior. There were some points were I felt that the character failed to deliver anything.

*Other cast: I liked the remaining characters (the four supporting roles) better than the lead ones but that doesn't mean they were great, they were just "Okay" compared to Sam and Milan's characters.

--->Romance: even though , I didn't appreciated the main romantic story, the chemistry was present and appreciated. The other two stories contained less chemistry.

--->Friendship: It was between Sam, his secretary and his driver; that relationship was good and entertaining. Actually, it's the best relationship in this film.

The ending wasn't unique since it was a typical rom-com ending.

*I didn't enjoy this film that much, I don't drop films but if it was a drama; I would've dropped it from the first episode.
*This film wasn't boring but it didn't entertain me at all.

*Is this film memorable: No it's not, I won't remember its events after two or three weeks, I will just remember that I watched it.

Drama's and Movies that I Own
16 titles