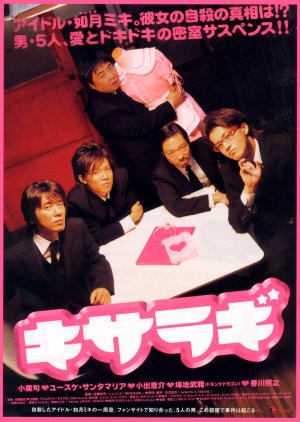 One year after the suicide of C-list model Miki, five of her fans come together for a commemorative meeting: fan club leader Iemoto, Yuji Oda, Snake, Yasuo, and Musume Ichigo. Sitting down together for the first time, they reminisce about their idol, wondering how someone so bright and beautiful could have possibly taken her own life. It just doesn't make sense. That's when they reach a revelation - she must have been murdered! The five heatedly discuss her death, expressing their suspicions and weighing the many clues and possibilities. The more they talk, the more the case takes shape in their minds, and the closer they come to the truth. Edit Translation 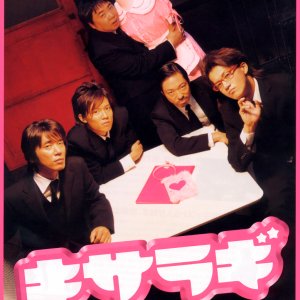 Completed
biniBningPunkista
11 people found this review helpful
Other reviews by this user
1
May 13, 2012
Completed 1
Overall 9.0
Story 9.0
Acting/Cast 10
Music 9.0
Rewatch Value 9.0
A really funny movie starred by 5 outstanding actors including Oguri Shun. I can't help laughing through out the duration of the film.

Why? As the five characters slowly investigate among themselves the truth behind the death of their gravure idol during her 1 year memorial anniversary, they unfold each other's personal lives and connection with the dead idol. During this time, they are all cooped up in a small apartment formulating reasons as to what really happened before and during the time of their idol's death.

If you think this is a boring film, well watch the movie and think again. This isn't your average film full of talk, mystery and well… more talk. This is one of those films that would make you scratch your head in the beginning, then seat straight-look-forward-to-screen in the middle and finally say "So that's what happened" in the end.

Its very entertaining to watch not that their acting was over the top, it was simply perfect. Every character portrayed themselves so well. The way they analyzed each other, puzzled things together and draw a conclusion to each scenario... it was very smart and witty. There were flashbacks to give a better visual of the scenarios they come up with and that definitely helped in building up the story and make the unfolding of the mystery more fun. I give kudos to the writer of this movie who made everything interesting.

Cinematography wise, it wasn't much since the focus is more on each characters who are talking inside a small room and as for the music I wasn't able to remember it much but it did somehow help as a background to build up the mood of the film.

Recommending this to those who like watching films which are more on the conversation side with mystery and comic relief on the side lines. BTW, there's no other film that I could compare it with since I think… it is one of a kind.

Completed
Jamira_dramaGAL
5 people found this review helpful
Other reviews by this user
1
Apr 21, 2014
Completed 1
Overall 8.0
Story 9.0
Acting/Cast 10
Music 7.0
Rewatch Value 8.0
At first I thought what could they possibly put in 2 hours of movie. I wondered if I would get bored but that was most certainly not the case. This movie left me curious at many points and made me laugh throughout. The actors play their roles amazingly well and the story is well-paced as well. Though the beginning was slow and made me question wasting 2 hours on this movie it picked up fast and did not fail to impress. With a sweet story with plenty of comedy, mystery and male-bonding. This is a movie to which every fan can relate to at some point.

Overall this is a brilliant movie which had a terrific ending. It is a amazing for a one time watch and I have a feeling that I will be watching this again in the future too.

New Topic
Be the first to create a discussion for Kisaragi