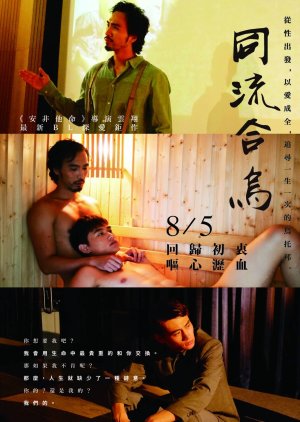 Completed
Lily_B
3 people found this review helpful
Other reviews by this user
0
Jan 28, 2017
Completed 0
Overall 7.0
Story 7.0
Acting/Cast 8.0
Music 3.0
Rewatch Value 3.0
If you like teacher/student stories and if you don't mind explicit (bi)sexual content, this is a good movie.

I liked it. It was not amazing but it was a nice watch. It could have been a deeper, more emotional story but on the other hand I guess it was meant to be just what it was. It was very dream-like, and not just the parts that were actual dreams. A young person's dream. Or someone with a young soul, doesn't matter… I liked some of the things they said even though it felt like the whole movie was just a sort of frame for those words… fair enough! The writer is obviously a big fan of Mishima Yukio but I kind of like the obviousness of that, too. The scene where the main character sees a place from a novel in real life was really cute.

Some parts of it were a little bit weird and almost too much (sort of like teaching a person to swim by throwing them into deep water before letting them practice at the shallow end of the pool) but I kind of understand that, too. The professor wanted to be honest and open about the way he thought and lived and that's not wrong.

As I was watching this I couldn't help thinking of the movie Koi. (J-drama special.) Teacher-student affair/menage à trois even though they are different (they were four here, for one thing *lol*). Koi had less sex scenes and less homoerotic content (but it was implied and until someone reads the novel and tells me otherwise I'm sure it was more like "text" and not subtext in that one!) but on the other hand it had more… well, plot, story. (Also, it had Arata as a hot English literature professor - forgive my bias!) But like I said, I think the writer or Utopia had a different aim. The makers of the movie wanted people who watched it change their way of thinking in a certain direction… which is something I sympathize with.

I also liked that the only really sad part of this was the ways of the society they lived it; the overall mood of the story was happy and accepting and in the end sort of sweet. Some people may find it bizarre but I kind of liked it!

The acting was good but nothing extraordinary I guess. I found the characters believable. I've already forgotten the music. I don't rewatch, I never know what to say about it...

Completed
Senpai
1 people found this review helpful
Other reviews by this user
0
Jun 4, 2017
Completed 0
Overall 7.0
Story 8.0
Acting/Cast 7.5
Music 7.0
Rewatch Value 7.0
This film tells the story of a college student in Hong Kong who lives with his mother and has a Catholic girlfriend. One day he attends a lecture on Greek philosophy, and he is intrigued by the teacher. More and deeper, he is drawn into the mysterious world of sexual seduction.
"Utopians" has a first part that is dominated by the figure of Hins and his frantic search for identity, especially sexual; To do so depends on your mentor as you would with any dedicated student, although the visions, dreams and nightmares continue to fill your world; In the second part of the movie tries to give a concrete narrative by building a complete story with a final surprise, sorry that everything seems a bit too rushed and not in line with the first part more abstract but certainly better managed.
"Utopians" is quite different. It has philosophical, religious, and political elements in it. The story is told in a linear fashion, making it very easy to understand. The college student, Hins, is very friendly, and I think people can relate to him and his experiences of self discovery. The girlfriend is an interesting character as well, and plays a key role in the story. The court scene is very touching and perhaps the highlight of greatest impact. Weak spot is the lack of perception of scene, there are several scenes that are continuous and long, like the first scene, and also the scene of the beach where San Sebastian is tied in a tree. The artistic elements in "utopians" are a "pronouncement for discerning eyes".
Written and directed by Scud, he made "Utopians" a veritable visual artistic exercise from a perspective of image research, cleanliness of recovery, paint brush, obsessive quest for perfection of forms, especially those of organs, Continuous return to the sea as the infinite space in which to dive reaching a unique style always tended to the sublimation of visual audio.
Although it is extremely anti-homosexual and somewhat conservative I can assure that "Utopians" certainly is one of the most beautiful and intense films, in favor of a philosophical reflection on the concept of "emotional freedom" through frequent citations of the Hellenistic period; A more mature approach, so to speak, an awareness gained in sexual freedom and social prejudices that surround it.